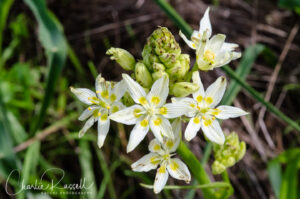 Natalie Coffin Greene Park is a great starting place for a wildflower hike in the Mount Tamalpais Watershed, near Phoenix Lake. The park is on the edge of land managed by the Marin Municipal Water District, which does an amazing job of maintaining trails for public use. There are many miles of trails in this area, with an interesting mixture of riparian forest and grassy hillsides. We did a 4.7 mile loop along the lake shore and up into the hills in late February, looking for early wildflowers.

Fetid adder’s toungue is an interesting flower, one of the earlier bloomers in this area. It is easy to miss the small flower itself, but the mottled leaves stand out if you are looking for them. These generally bloom from late January through early March. They are supposed to have a faint putrid smell, but I’ve never noticed it. That attracts their preferred pollinator, a fungus gnat. After the bloom fades the pedicel lowers the seed capsule down to the surface, where ants find it very attractive and carry the seeds off. I have a closeup of the flower in the gallery below. 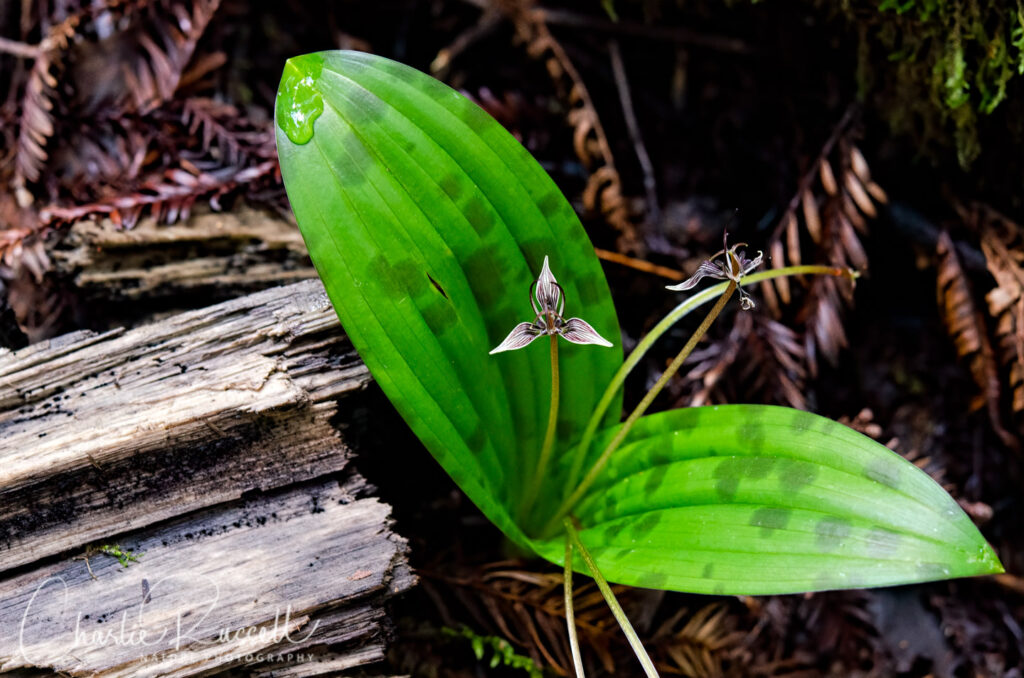 Milk maids are a simple, and common, flower. One of the reasons why I like this is that they are one of the first prolific early bloomers each year. You’ll find them in many locations in Marin and Sonoma. This year, with all the cold weather and rain, it took awhile before we found many of them. 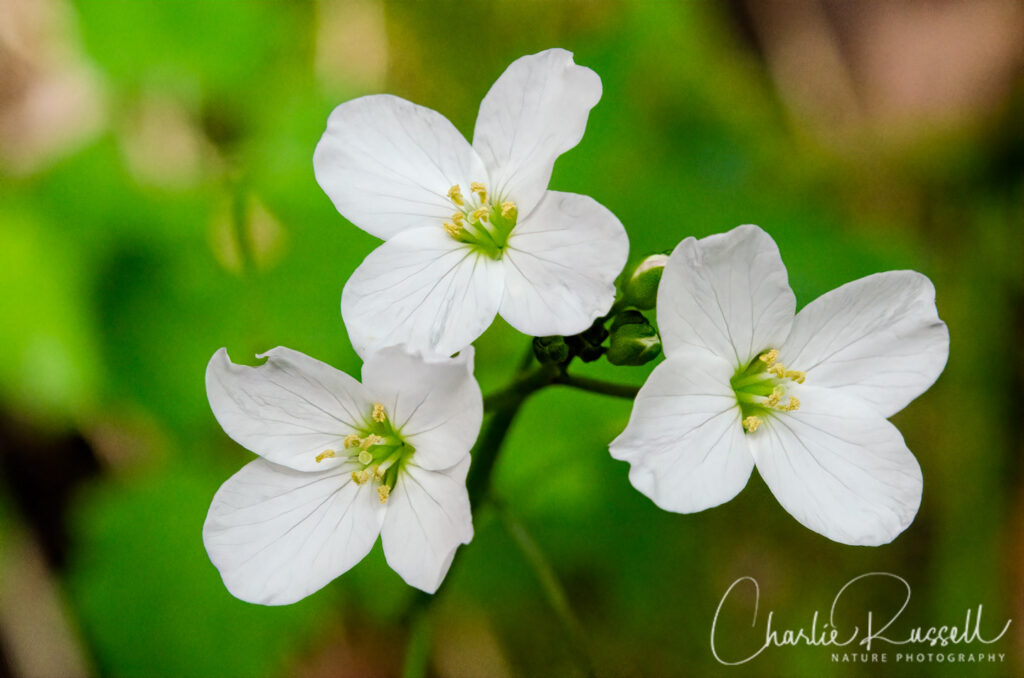 Another great early season bloomer is Checker lily. This is a hard flower to photograph, because it nods down, has a lot of “depth”, and I usually find it in very shady locations. 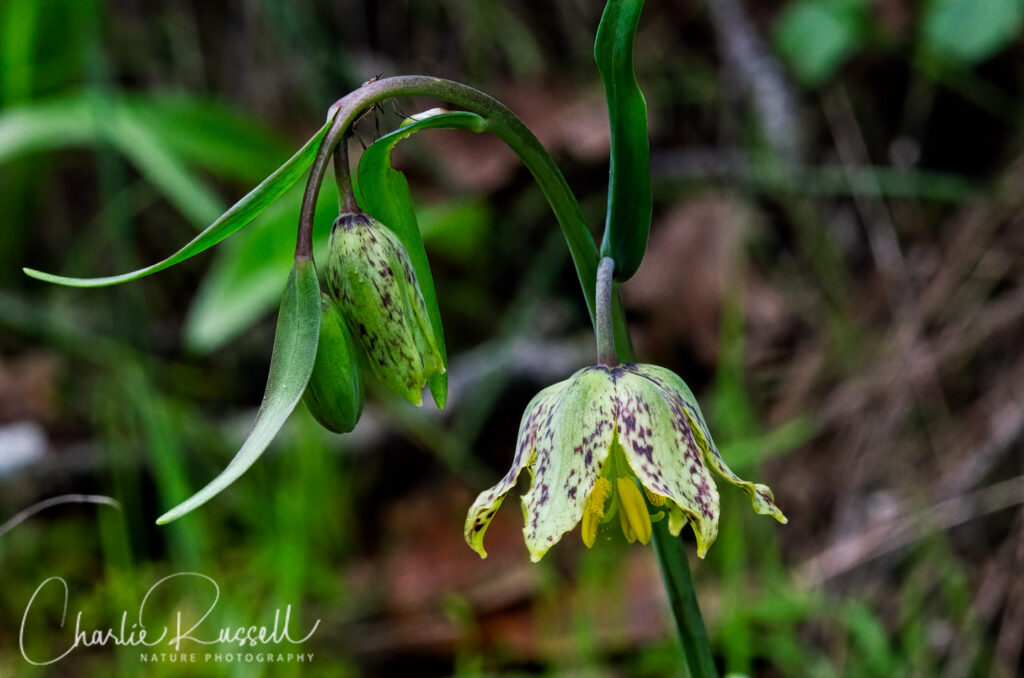 The flowers I’ve shown above were all found in the shadier trail along Phoenix Lake. Our hike also took us up into the hills, where we found a completely different set of flowers. The Mosquito Bill shooting stars were just starting to bloom on the hillsides. 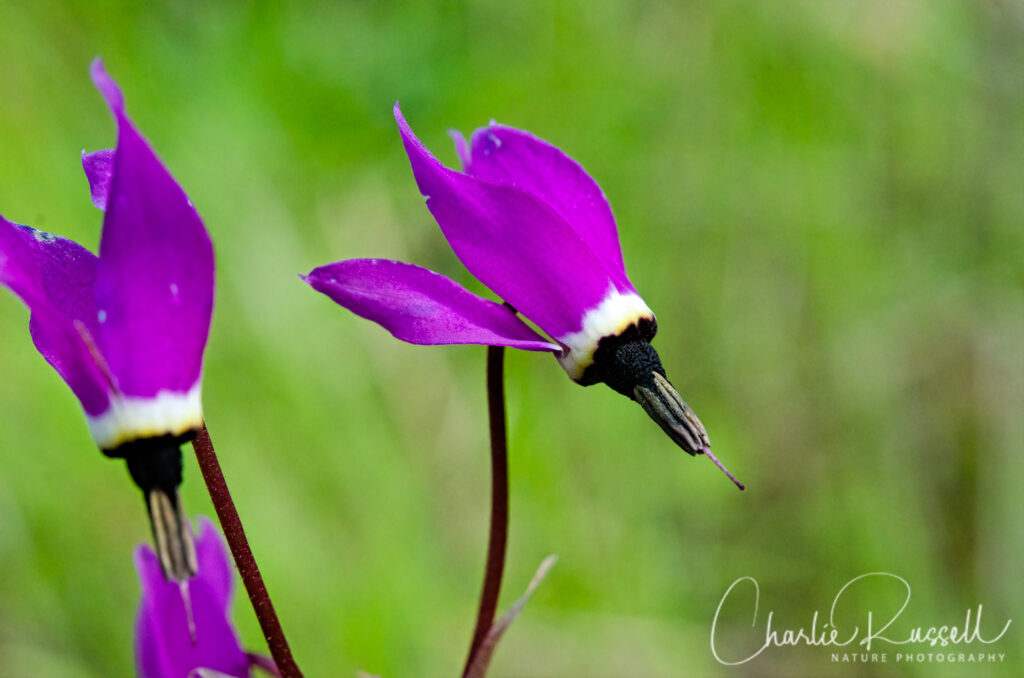 There were many different ferns, lichens, mosses and mushrooms all throughout this hike. 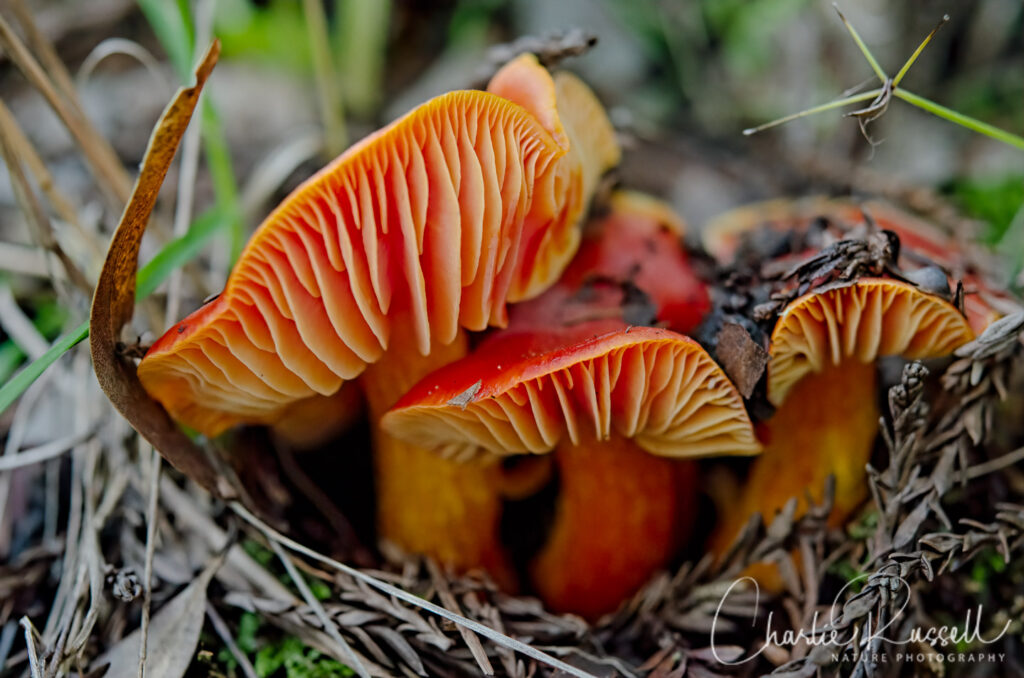 This was about a 5 mile hike with a fair amount of elevation change along the way.

We started at Natalie Coffin Greene park, near Ross in Marin County. You will hike west on Diblee Road until you get to the dam for Phoenix Lake. Our path took use left (south) along the lake. There were a few wildflowers along this dirt road. 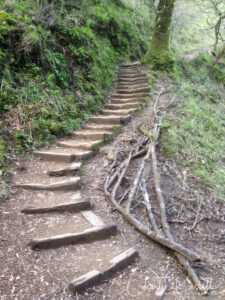 Gertrude Orr Trail, steps as you go along Phoenix lake

Past the lake you will see a sign for the Gertrude Orr trail, which takes you back along the lake, heading north. It starts with a series of steps, and the trail has multiple elevation changes along the way. This is the shadier side of the lake, where we found multiple patches of Fetid Adders Tongue, Milk Maids, and Checker Lily. There are many different varieties of ferns along the way.

At the west end of the lake the path crosses Phoenix Creek. This can be wet and muddy if there has been a lot of rain. Fortunately, the creek was low enough for us to get by.

From here you head up Shaver Grade Road. It is broad and easy, but you want to keep an eye out for speeding mountain bikes. Lots of room for everyone. 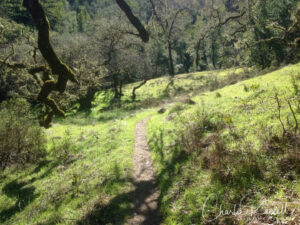 Hidden Meadow Trail as you look back downhill 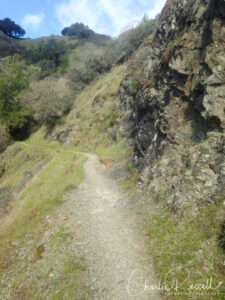 Yolanda Trail as it runs across the hillside

The Yolanda trail wanders across the grassy hillsides, where flowers weren’t as plentiful this time. However, it was worth hiking this way as this is where we found shooting stars and Blue Dicks. There also is a lot of poison oak on the hillsides, so be careful.

Eventually you come to a branch in the trail, we took the left option (Yolanda Cutoff), thinking it would be the quickest way back. This is a steep trail, and not as heavily traveled. We did come across some Mule Deer on this section.

Eventually you return to the roads that will take you back to the parking lot.

Here’s the track that we followed – note that the track says that this was 4.7 miles, but that isn’t taking elevation changes into account. I had some technical difficulties with my phone, so I don’t have all the elevation information there.

Natalie Coffin Greene Park and Phoenix Lake are in Marin County, near Ross. From Highway 101 go west on Sir Francis Drake Boulevard for about 4 miles, and turn left on Lagunitas Road. After about a mile you will come to the parking lot for the park, which is the end of the public road. Note that parking is somewhat limited, it could be crowded on weekends. We visited on a Wednesday morning and found plenty of parking.

There are portable toilets at the parking lot, but no drinking water.

Even though this has been a wet winter, we found excellent weather in late February. Temperatures were in the upper 50’s at the start, but the area is sheltered from the wind so it was comfortable. Mid to late February is the earliest you will see wildflowers, but it was fun to see all the fresh, green ferns, and if you look closely you could see a wide variety of mushrooms.

Along the lake, on the Gertrude Orr trail, it is shaded and damp, and we found Fetid Adders Tongue, Milk Maids, Trillium, Checker Lily, and Warrior’s Plume. Some patches of Fetid Adders Tongue had already gone to seed, but as we progressed along the trail we found some in full bloom.

Up on the hillsides, along the Hidden Meadow and Yolanda trails, you are more exposed (and warmer). It was too early to see a lot of the grassland flowers, but we did find Hounds Tongue (no pictures, I had some technical difficulties), shooting stars, and Blue Dicks. Later in the season I am sure you will find more flowers here.

Here’s a listing of the native plants that we found on this visit.

We also found a wide variety of ferns, lichens, mosses, and fungi, although I only have photos of a few.

This entry was posted in California Wildflowers and tagged Lakes, Marin County, Rivers and Streams.