Los Vaqueros Reservoir is an oak-dotted hilly grassland area southeast of Mt Diablo that has a number of hiking trails. You can find a good variety of wildflowers, as well as many interesting birds. On this visit we hiked the West Loop trail, which has great views of the reservoir and combines open grassland with a nice oak-shaded stream.

Here’s a sample of a few of my favorite Los Vaqueros wildflowers from this hike (click on the image to see a larger view).

The “star” of this hike was the Padre’s Shooting Star. This flower comes in several variations, from white to pink, and I was happy to find some that combined the two colors. I have a shot of the all-white variation in the gallery below. There were large patches of these at several places along the hike.

Purple sanicle is a grassland flower that many people overlook. The dark flowers just don’t stand out from a distance. I find it interesting, and there was more of this on these hillsides than I usually see in other places that we’ve hiked.

On the back side of the hill that the trail climbs there is a stream in a gully, and if you walk to the edge of the gully you’ll find a very different collection of plants. For example, the hillside going up from this area was covered with Buckbrush in full bloom.

Tucked under the Buckbrush and Chamise I found quite a few Fremont’s death camas. 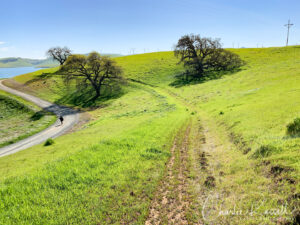 The West Loop trail is about 3.5 miles, starting at the Marina. It is one of the shorter hikes in Los Vaqueros. You’ll head north from the Marina on a wide gravel road. Look for a graded path that runs parallel to the road (as you can see in this picture), that starts after a few hundred yards. You’ll find many more flowers along that path than you will on the road. 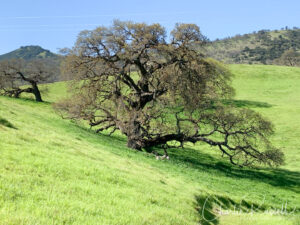 Along the way you’ll see many large Valley oaks. The shooting stars were often found near these, and in the deeper shade under the tree we found Miner’s lettuce. 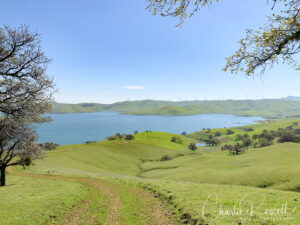 We hiked counter-clockwise, so we passed the first trail junction. At about 1.2 miles there was a second trail junction, clearly marked, where we turned west and started the climb up the hill. This is essentially a fire road, and it heads straight up the hill without any switchbacks. You get a great view of the reservoir.

Around 1.8 miles you’ve reached the crest of the hill. To the west you’ll see a line of rocks, the start of the Chamise and Ceanothus area, where there is a stream. If you head off the trail here you’ll find Fremont’s death camas along the stream, and other flowers that you won’t see in the open grassy areas.

At 2.3 miles there is a bench, and a picnic table, with a great view of the reservoir. From here we followed the path down the hill until it joined the road to head back to the starting point.

I should mention that when hiking in this area you have to be aware of a few potential hazards (none of which we encountered on this visit):

The Los Vaqueros Reservoir is managed by the Contra Costa Water District. The West Loop trail (and many others) are accessible from the south entrance. From highway 580 near Livermore head north on Vasco Road for 4.2 miles, and turn left (west) on Los Vaqueros road. From Antioch in the north, head south on Highway 4 and continue onto Vasco road, then about 13 miles until you see Los Vaqueros road on your right.

There is a fee to enter the watershed, which varies depending on your age, if you are a CCWD rate payer, and the kind of vehicle you drive. Figure on $6.00 per car. The area is only open from roughly 7:00 am to 6:00 pm, but that varies a bit depending on the time of year.

As you drive in you will see toilet facilities at several trailheads, but the best restrooms are at the Marina at the end of the road. This also is where you would park for the West Loop trail. Food is available at the Marina, but it is limited to items that they can heat up in the microwave.

For the West Loop trail, head north past the Marina, on the gravel road. A map is available when you pay your entrance fee, but you can also download one from the Los Vaqueros Reservoir website. I also found several trail guides for the area at the AllTrails website.

We visited in mid March of a wet year. Pretty much all we found were early season flowers, not in great abundance. Lots of the hiking area is grazed, so the non-native grasses were generally kept under control. I think that this would be a better wildflower hike in April, although we would have missed the Shooting stars if we came later. When you get into May and later, check temperatures in the area, I suspect those exposed hillsides will get hot.

Note that during wildflower season many of the trails have sections that are closed to protect the nesting Golden Eagles. Most of the trails that we were interested in were open, but if there is a specific trail you want to try you should check to be sure it is open. The Los Vaqueros website had a map that showed which trails were closed.

Before I get into the flowers that we found on this trip, I want to point out that there is a lot of interesting wildlife in the area. Odds are you won’t see any of these, but it is great to know that CCWD is working to protect these species. Many are nocturnal, or in areas that you cannot reach on the public trails.

I did find a Sierran chorus frog in one of the streamlets the path crossed, near the lake.

Here’s a listing of the native plants that we found on this visit. The ones listed in color are endemic to California (that is, found only in California).