The Ol Pejeta Conservancy is one of the best places in Kenya to see Rhinoceros in the wild, along with a wide array of other African mammals. It is also a great place for birds! 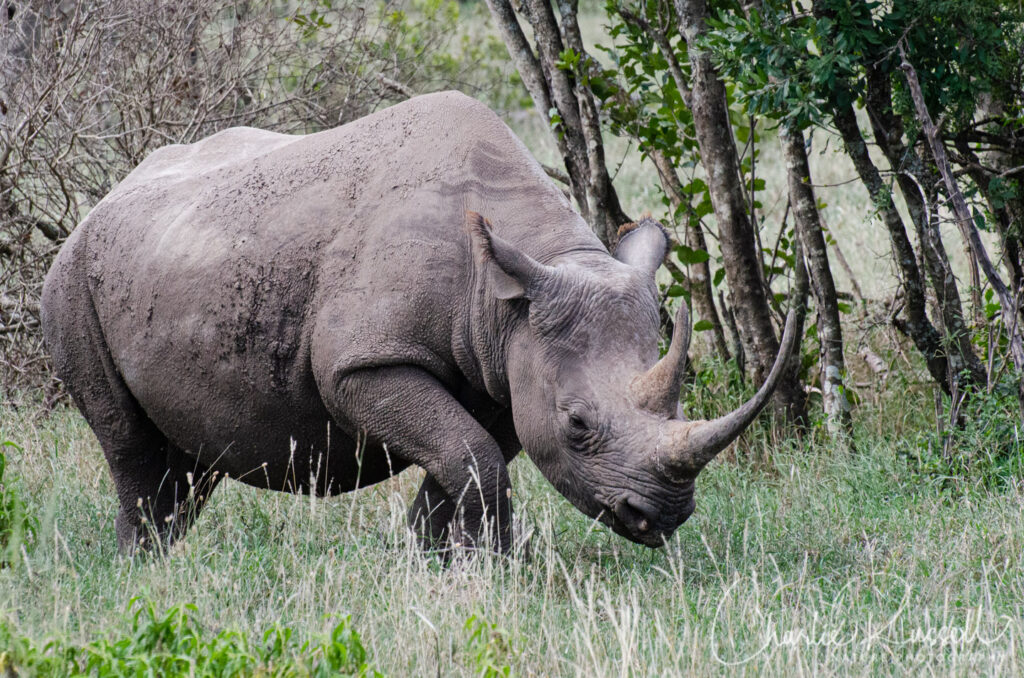 Ol Pejeta Conservancy is dedicated to the conservation of African wildlife, with a special focus on Rhinoceros. There are three species of Rhinos at Ol Pejeta: 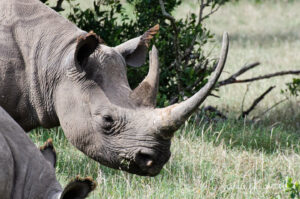 On this visit we only were able to see the Black Rhino.

By the way, do you know what you call a group of rhinos? A “Crash”!

There are a number of special camps in the Conservancy area. On this visit (summer of 2019) we stayed at the Sweetwaters Serena Camp, which has tents that face a watering hole. One Black Rhino came down to the water hold to get a mud bath (it helps get rid of annoying insects), which it clearly enjoyed. Then it ambled by our tent, just across a barrier ditch, hanging out for over half an hour! 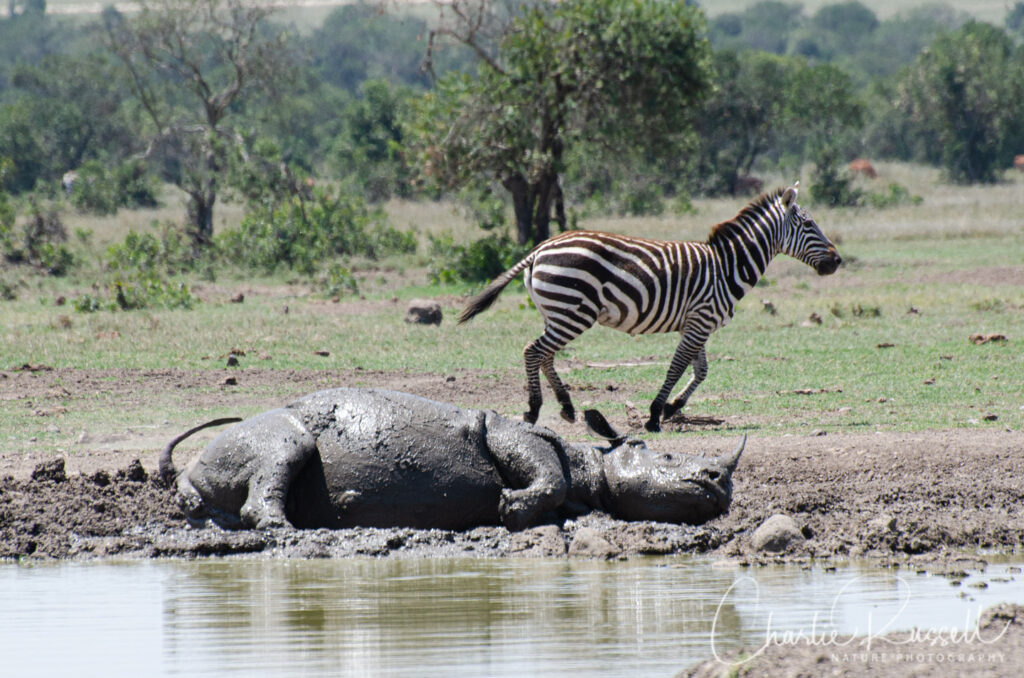 Another fun experience was visiting Baraka, the blind Black Rhino. He can’t be released to the wild due to his vision problems. We were able to feed him and give him a pat on the horn. 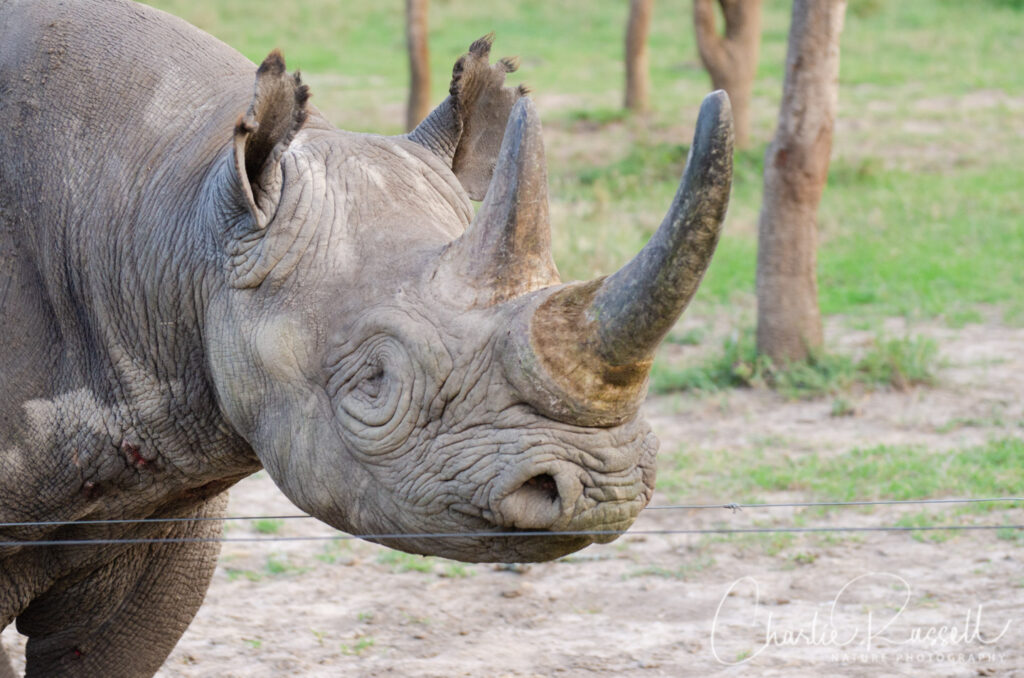 The Ol Pejeta Conservancy is about a three hour drive (roughly) from Nairobi, which makes it very accessible. We spent a day and a half there, which was about the right amount of time.

In Kenya you will find a variety of arrangements in conservancies, national parks, and national reserves. In some cases there are very few roads, and your guide can take you to just about any spot that you would like to see (such as in the Maasai Mara). In other cases you find that there are roads and pathways that your safari jeep has to stay on. Ol Pejeta is a bit in between, for the most part you have to stay on the dirt roads, which sometimes means that you don’t get right up close to the animals. A few of my photos are long-distance shots, so they might not be as crisp as I would like.

Beyond Rhinos, another big draw at Ol Pejeta are the African Bush Elephants. I probably took over a hundred elephant photos in just two days. 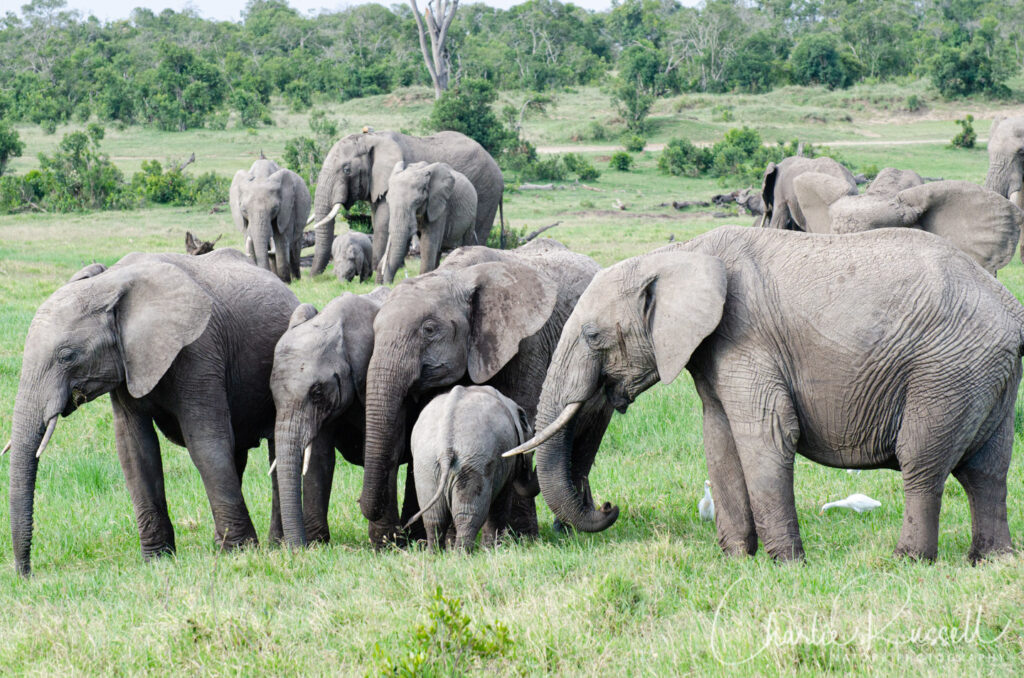 Someone had fun posting this sign by one of the bridges crossing the river: 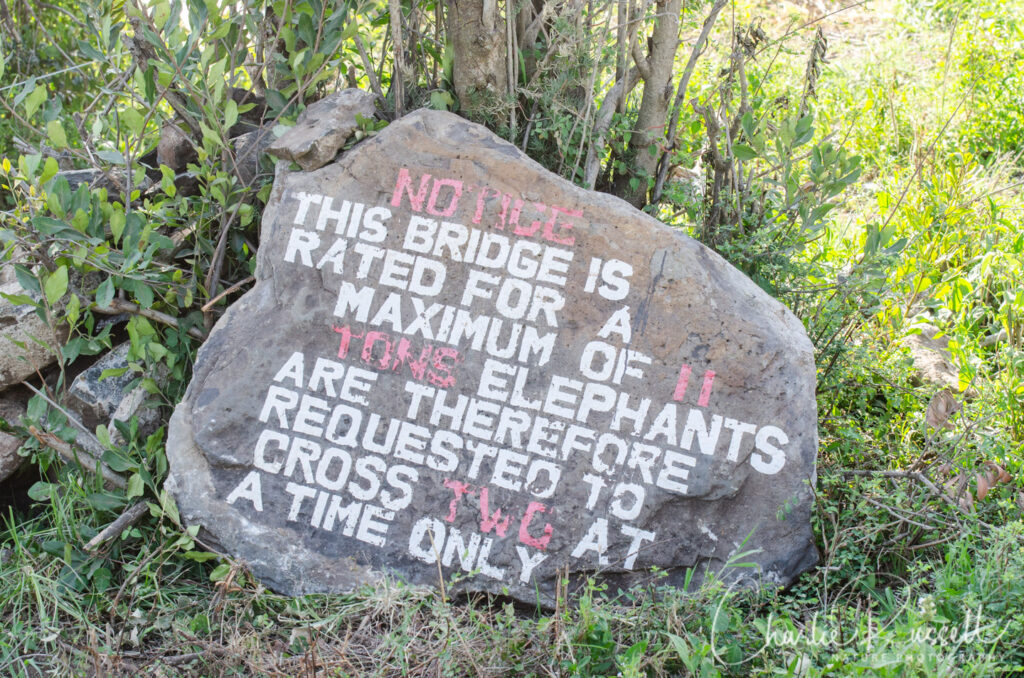 We did see a few Reticulated Giraffes. This sub-species of giraffe has spots that have well defined borders, unlike the Maasai giraffe that we found further west in the Maasai Mara. 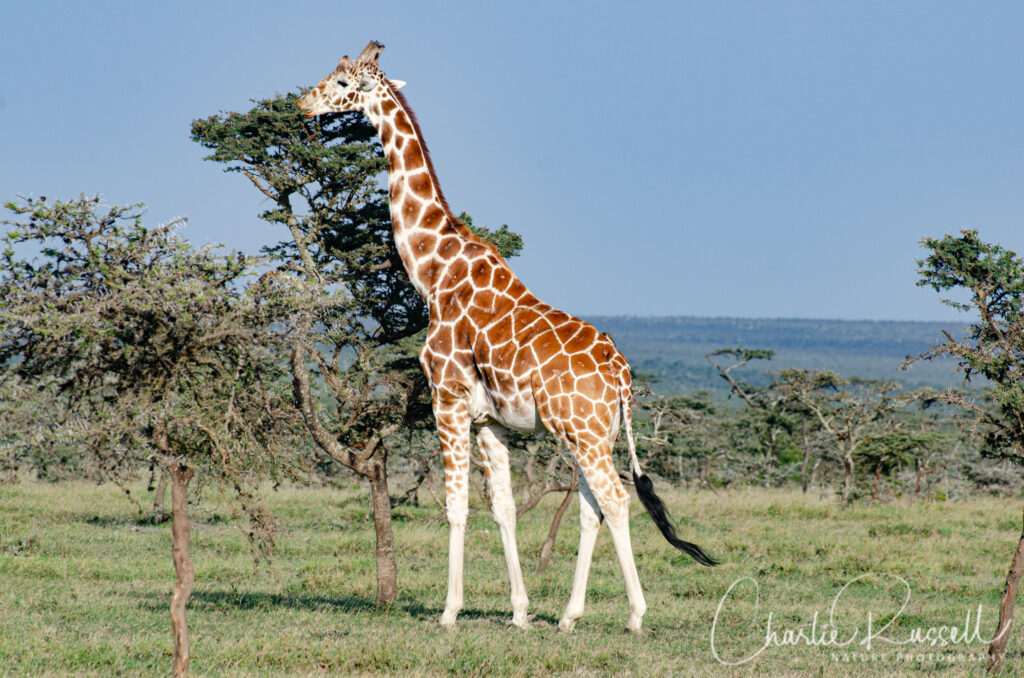 There were quite a few different species of birds here. The Lilac-breasted Roller is one of the prettiest. 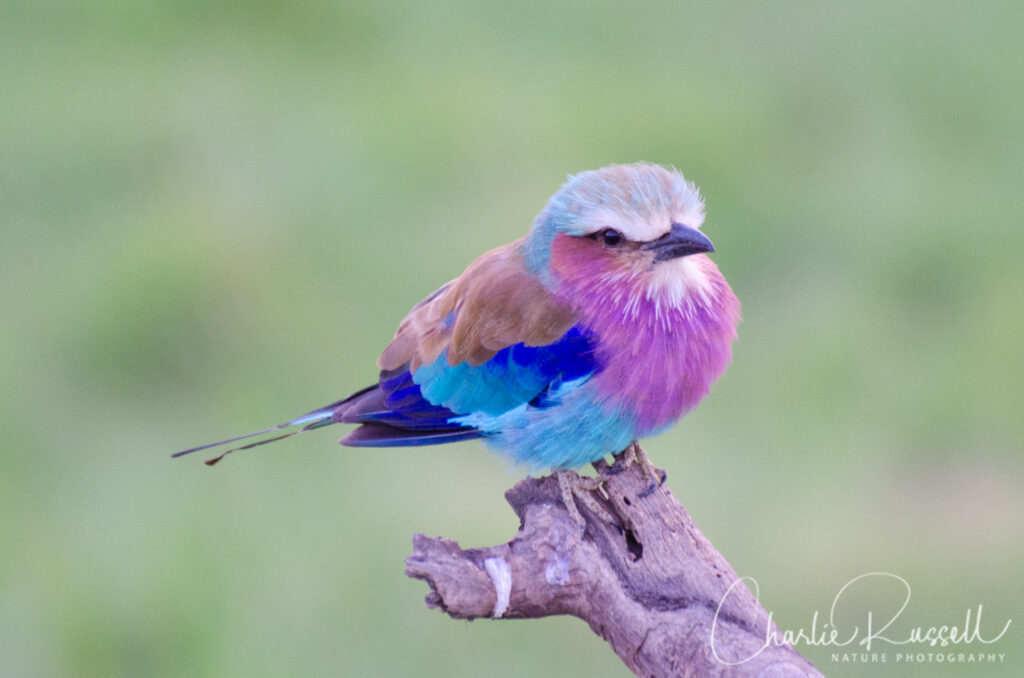 The Superb Starling is aptly named. We saw quite a few in our camp. 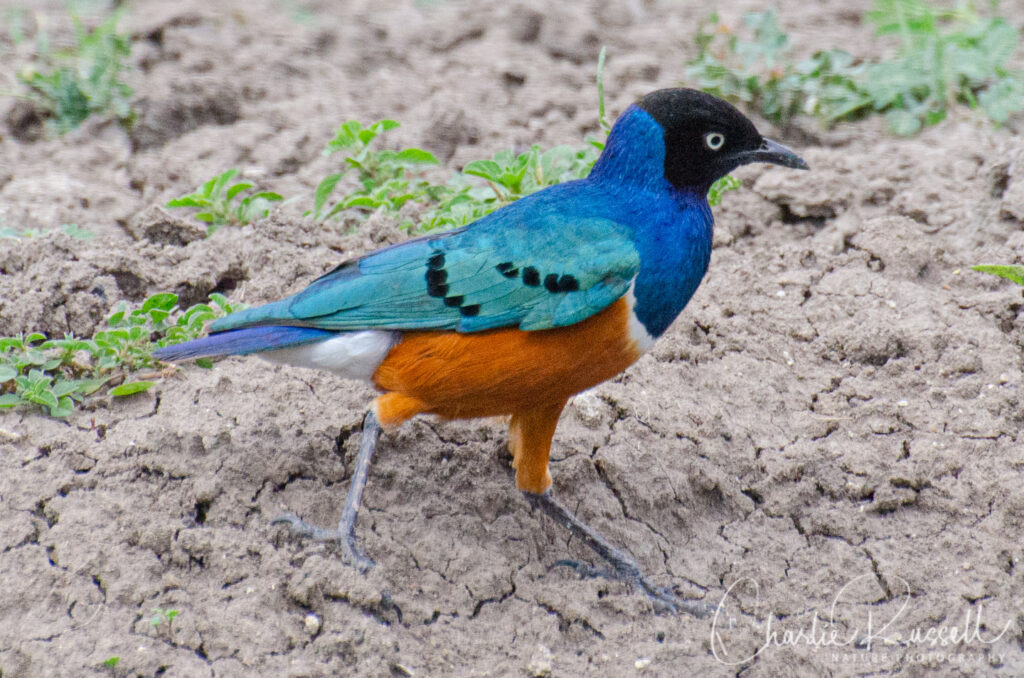 There are several camps in or near Ol Pejeta, and for this visit we stayed at Sweetwaters Serena Camp. It is a fairly large camp, very comfortable, with good food and service. One of the big draws here is that the dining area (and some of the tents) face a watering hole, and there are quite a few animals that come to visit, even in the daylight. 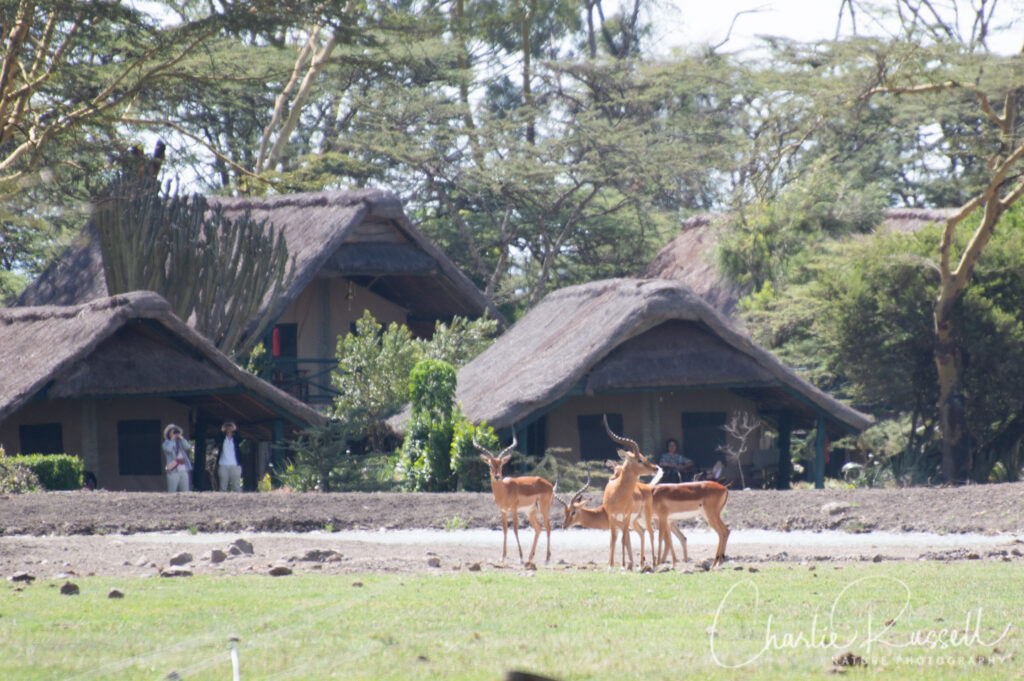 The “tents” are very spacious and comfortable. 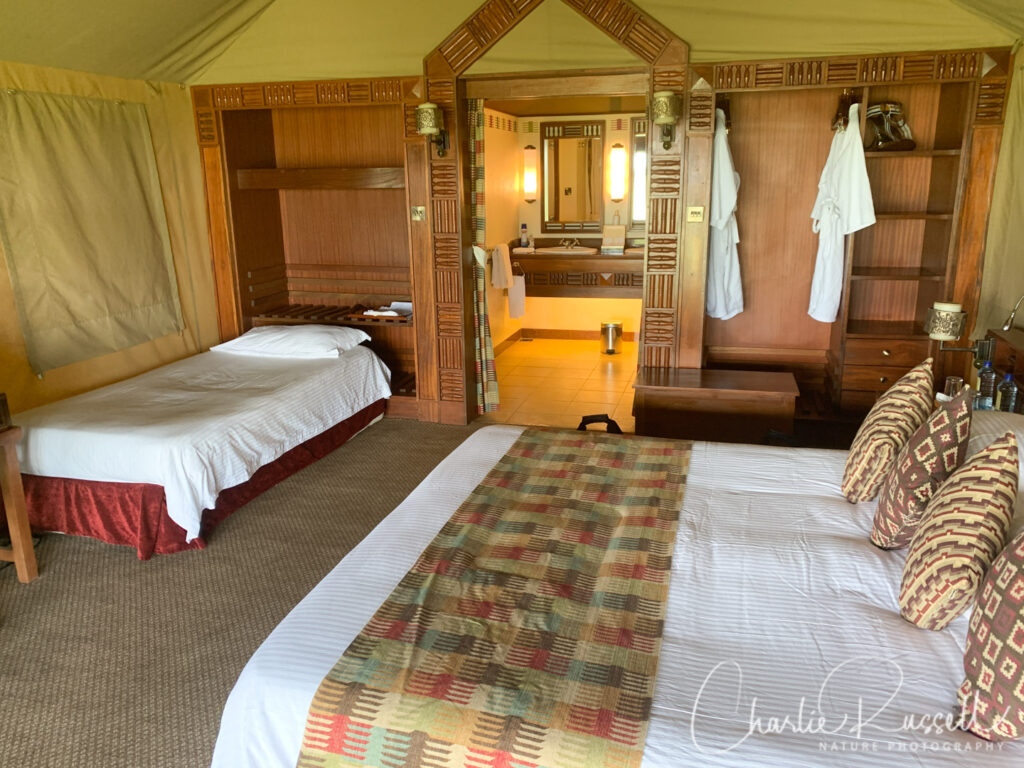 If you plan on visiting Kenya, I suggest that you work with a travel agency that has a lot of experience with this part of Africa. There are many camps to choose from, and you want an agency that is going to pick the best fit for you. As I’ve mentioned before, we have used Custom Safaris for each of our Africa trips. I highly recommend this company, the service they provide is outstanding. In addition to getting us through the Nairobi airport expeditiously (it is a confusing place), they provided our driver and guide Joseph, who knew Ol Pejeta in great detail and found just about everything we had hoped to see.

This entry was posted in Wildlife and tagged Africa, Birds, Rivers and Streams, Wildlife.