The Black Diamond Mines Regional Preserve has been on my hiking “wish list” for a long time, and with all the warm weather in February 2020 we finally had an opportunity to hike there. It was early in the year for wildflowers, but there were some interesting plants to find and the weather was wonderful! It is an “energetic” place to hike, though, with lots of steep hills and canyons. 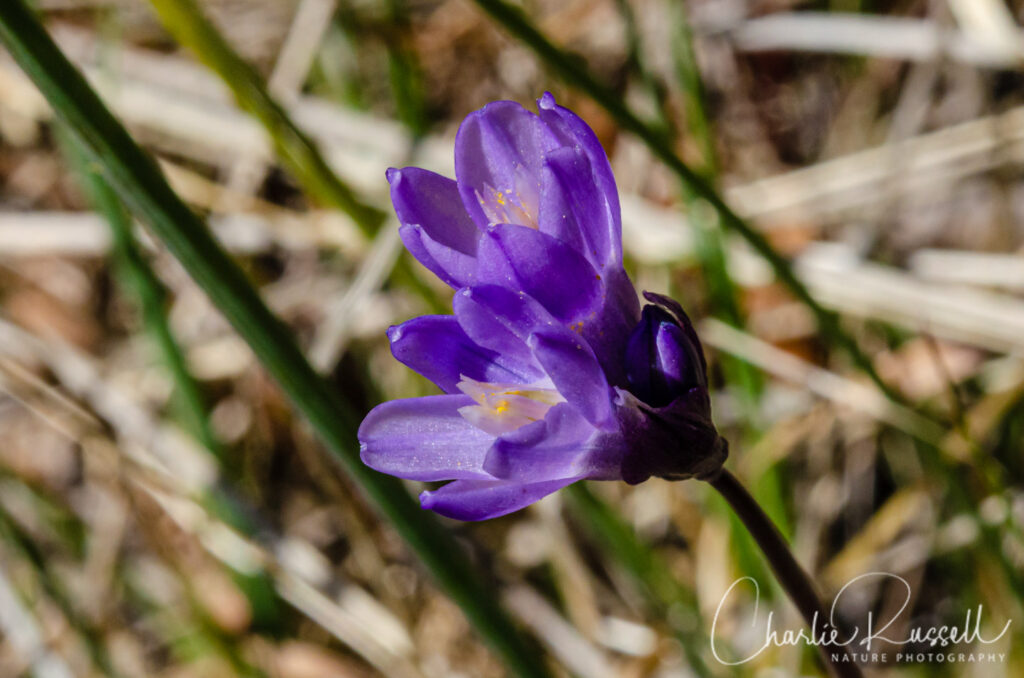 It was early in the year, and it has been very dry in the late winter, so there wasn’t a large variety of wildflowers. But you do get a different selection when you go hiking in February than you will later in the spring!

For me, the star of the hike was the Mount Diablo Manzanita, a very rare variety found only in California. There were quite a few on the Chaparral trail. The overlapping, fuzzy leaves are a key feature. 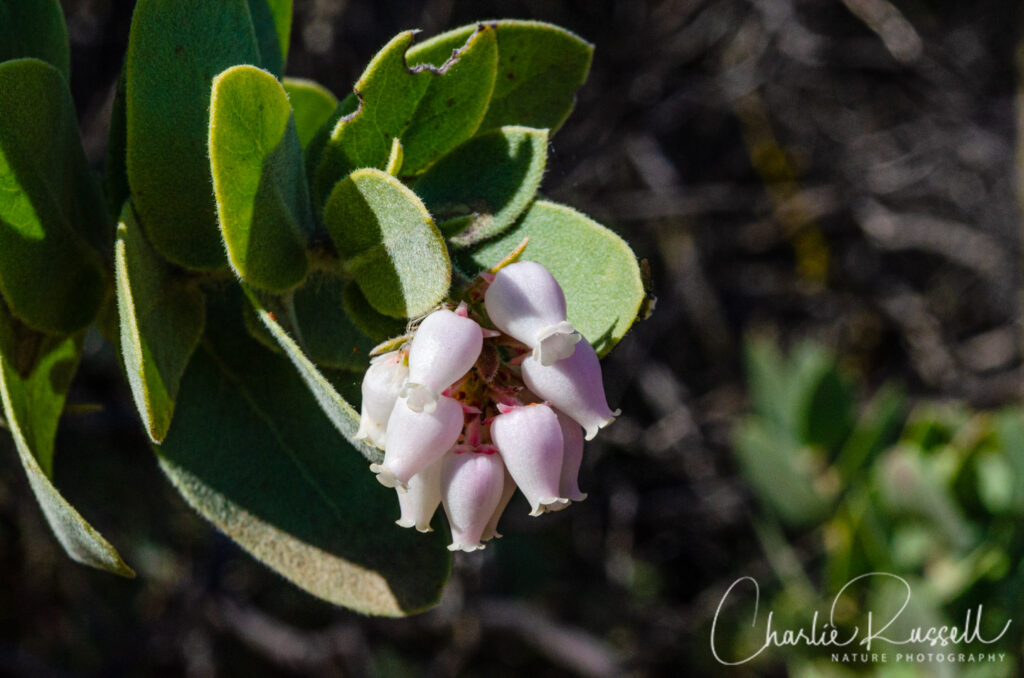 Associated with Manzanita is the hemiparasitic Warrior’s Plume, always one of the earlier flowers to bloom in California. 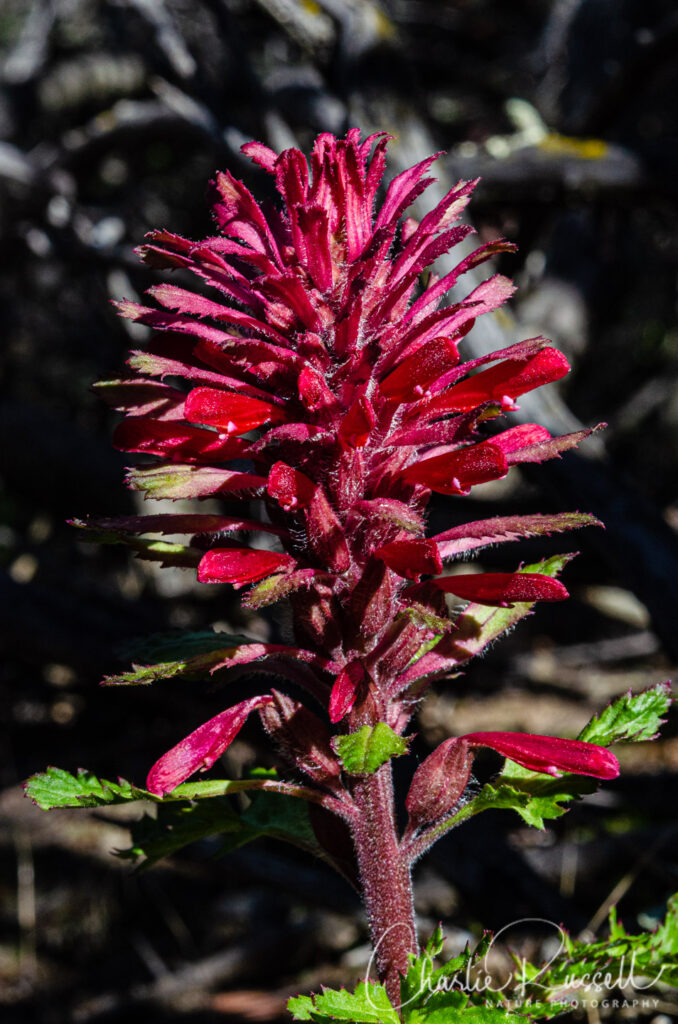 There were several species of Shooting Stars, on the end of the Chaparral trail and going up Manhattan Canyon.

We went on a grand loop encompassing several trails that took us through several steep canyons, up and down ridges, and across wide open grasslands. The total trip was 6.7 miles, and sometimes it was a bit tough going. We should have brought our trekking poles to help (but we didn’t – big mistake). 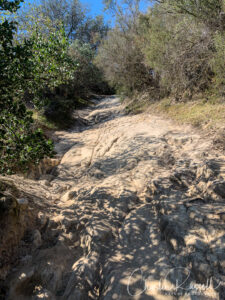 Climbing up the sandstone on the Chaparral Loop trail

The hike starts at the Somersville townsite (restrooms are available there). There are a number of trails that lead off from here, and it can be a bit confusing to find the right one. We headed up the Chaparral Loop trail, as I was looking for a rare species of Manzanita that can be found there. The climb up this canyon was a bit steep and slippery as you clamber up the exposed sandstone rocks. Along the way there are several mine shafts for extracting rock and sand that was used for glass making in the 1920’s through the 1940’s. This area is all Chaparral – Chamise, Manzanita, pine trees. The primary wildflowers along here were Warrior’s Plume, a hemiparasite that is often found under Manzanita. The Manzanita also bloom in February, they were just past peak.

Roughly at 1.4 miles into the hike we joined the Manhattan Canyon trail, another climb up but not quite as strenuous. Mixed oak woodland (and some poison oak), sometimes some steps in the trail. Along the way we found a lot of plants that were getting close to blooming, including masses of Shooting Stars. These were just starting to open up. 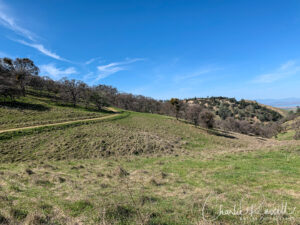 After about another half mile we came to the Black Diamond trail. This trail is open to hikers, bikers and equestrians. It is broad, and some portions are paved. From a wildflower standpoint this was less interesting, not much was blooming. You traverse mixed oak woodland (with a lot of very large California buckeyes that will be very pretty later in the year) as well as open, grazed grassland. This time of year the big attraction here are the wonderful views in many directions. You’ll reach the highest point at about the 3 mile mark. 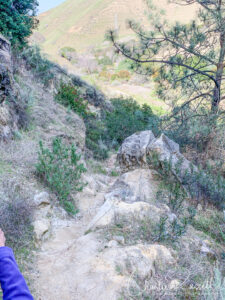 Some parts of the Coal Canyon trail are a bit rough

At roughly 4 miles you’ll see a path on the right marked with a sign post, for the Coal Canyon trail. You’ll see “Jim’s Place”, a small shelter carved out of the sandstone. Coal Canyon is very steep in places, and you will see lots of evidence of coal mining here (mine openings, coal dust tailings). Some sections, though, were easy and shaded. There weren’t many flowers blooming here on THIS visit, but there should be in a few weeks. Masses of Nemophilia leaves in the shady areas, along with many varieties of ferns and mushrooms.

You come out of the canyon and join the Nortonville trail at about the 5 mile mark (mileages are just estimates). You are back to the open, grazed grasslands, in an area that used to be a bustling coal mining community in the mid to late 1800’s. Unfortunately, from this point you have a long uphill slog without many wildflowers. When you cross the crest and head down the hill to the starting point, take the little side trip to visit the Rose Hill Cemetery, where the headstones are being restored. 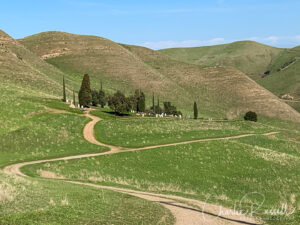 I don’t know if the open grassland areas will have many wildflowers later in the season. Most of what we found, blooming or getting ready to bloom, were in the canyons. But you have to cross the grasslands to reach some of those canyons. There is a LOT of elevation gain (and loss) here, on steep trails, but the canyons were really interesting. We enjoyed this hike even though it was a bit strenuous, and the weather was perfect for hiking.

Black Diamond Mines Regional Preserve is near Antioch, CA. From Highway 4 take exit 26 and go south on Somersville Road. Continue on that for just under 3 miles until the end of the road, where you will find the entrance to the Preserve. Access is $5 per vehicle, but they generally only charge during weekends and some holidays.

For this trailhead, continue up the park road, past the visitor center, until the parking area at the end of the road. There are restrooms available there. Note that many of the trails are open to bikes and equestrians.

The area has a rich history of coal and sand mining, and there are numerous informational signs. There are mine tours on weekends during the spring and summer, but check on availability in advance as the mine (and underground visitor center) may be closed due to construction.

There is an excellent trail map available. However, there are impromptu trails that don’t show on the map so sometimes it can be a bit confusing.

On this late February visit the weather was excellent, a clear sunny day with temperatures reaching the upper 60’s, with no wind. February is when the manzanita and warrior’s plume is blooming. I expect flowers will be available from February through early summer, but check on temperatures when you get to late spring, this can be a very warm area.

Here’s a listing of the native plants that we found on this visit. The ones listed in color are endemic to California (that is, found only in California).