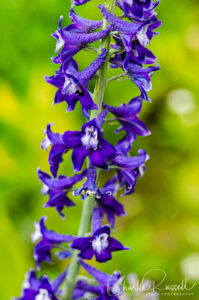 Barker Pass is a wonderful area near Lake Tahoe where you can find multiple spots for viewing summer wildflowers. My favorite spot is Hidden Meadow, which is an “off the beaten track” spot with a rushing creek and a lush mountain meadow full of a wide variety of wildflowers. This isn’t an easy place to find – there are no signs, there isn’t a formal trail, it is just a spot where you hike a short way up the mountainside along a stream until you find a wonderful wet meadow.

One of the reasons I like the Barker Pass area is that there is something for people of all hiking abilities. 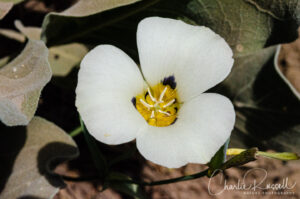 Look at the list of wildflowers we’ve found here (at the end of the article), it is quite extensive AND they are all native species!

We’ve visited here twice. This year (last week of July 2020)  we had a slightly different set of wildflowers than we had in our prior visit (first week of August 2017). Both times there was plenty of water in the meadow and creek, but this year some of the more exposed areas on the hike up were a bit drier. I’ll focus on the flowers from this year, but I’ve included a gallery of photos of the additional flowers that we found in 2017 as well.

I was really hoping we would find Alpine lilies here. We did! Both years, in the meadow as well as at a roadside seep before you reach this spot. The advantage of the ones in the meadow is that they aren’t covered with road dust. 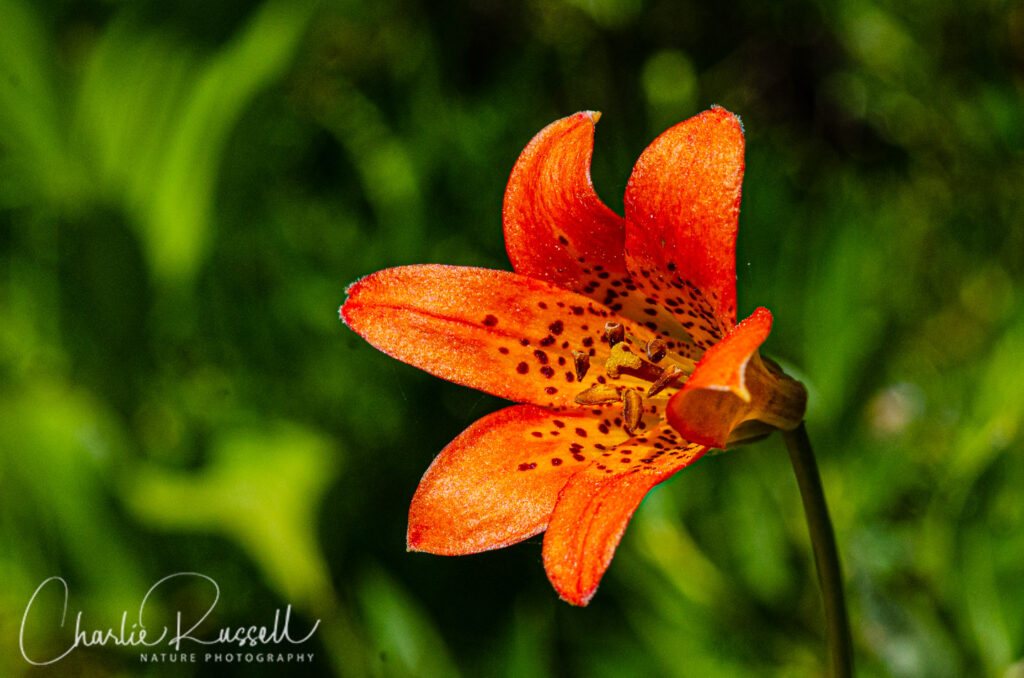 I’m fascinated by native California orchids, and there were two species here. They were quite abundant throughout the meadow, close to the water. Sometimes you can also find them along the road in some of the wetter spots. 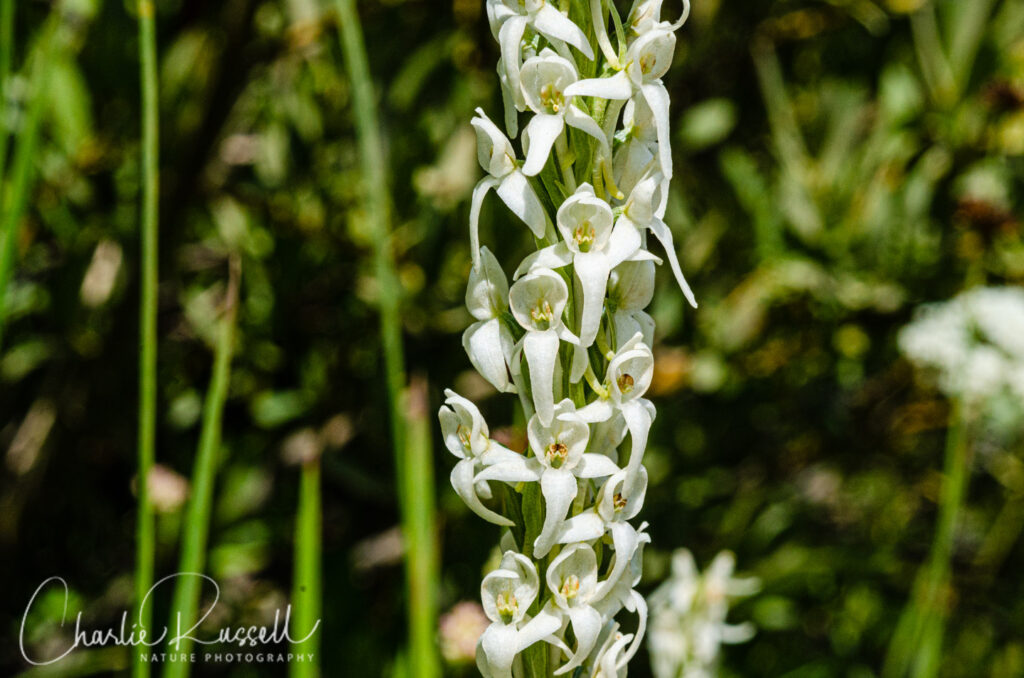 Little elephant’s head is a fun flower to find, and it was one of the most abundant flowers in the meadow on this visit. 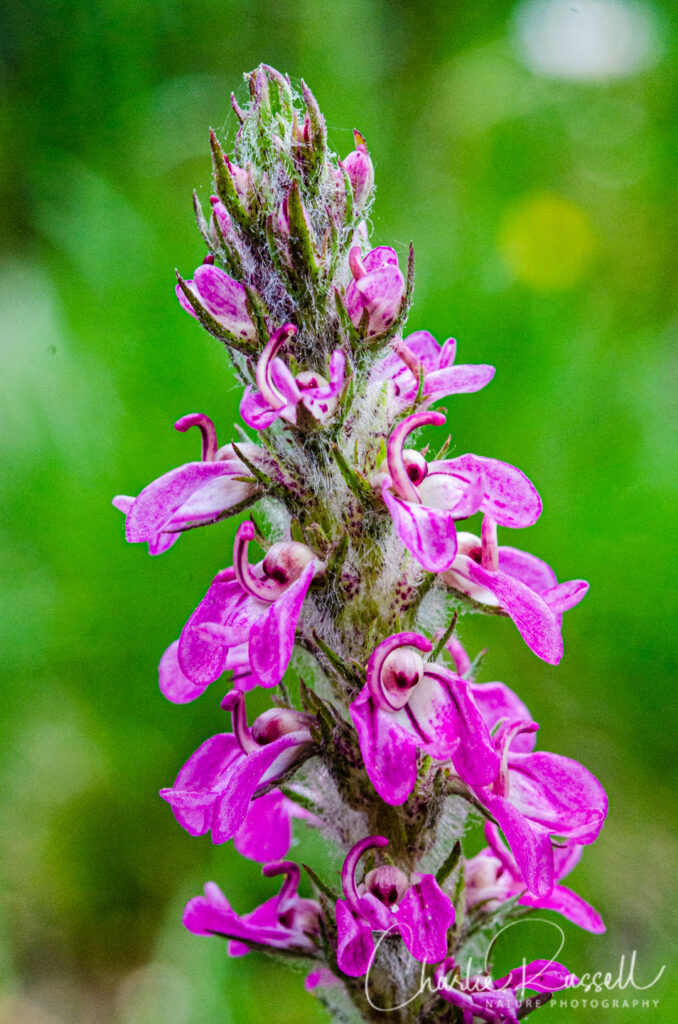 There was a good variety of composite flowers – several kinds of fleabanes, several kinds of arnica, but the most abundant was tundra aster, filling up several of the more open spots in the meadow. 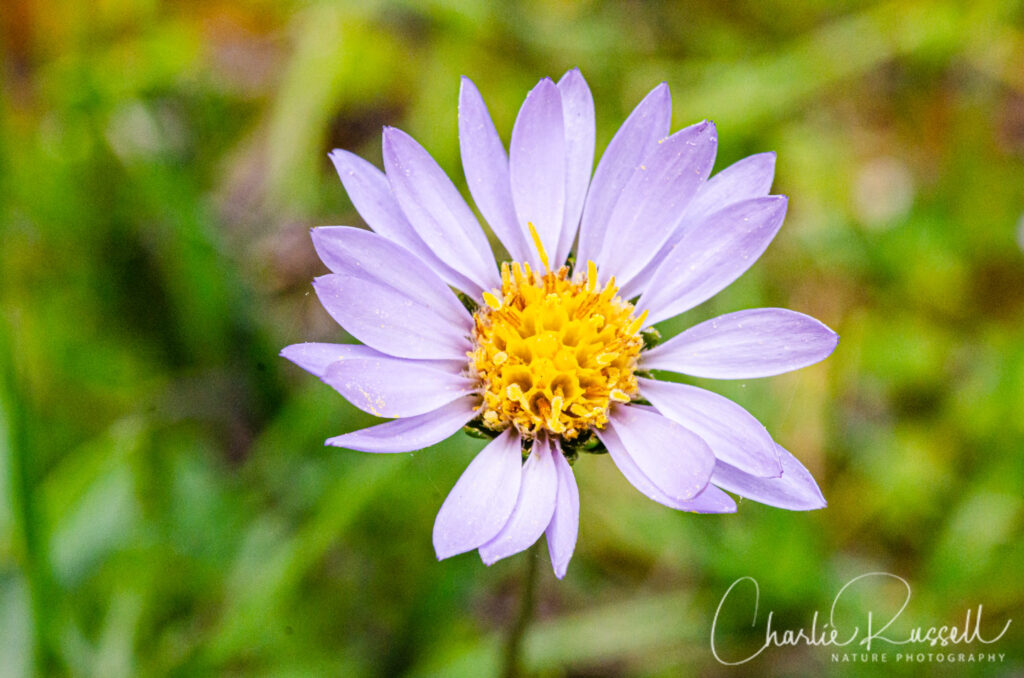 This has been a good year for California blushing monkeyflower (split off from Lewis’s monkeyflower a few years ago). I’ve seen more of it this year than I can remember seeing in prior years! This hike was a great place to find it – a nice patch by the creek at the start of the hike, abundant clumps of it artfully scattered about the rock fall at the upper end of the meadow. 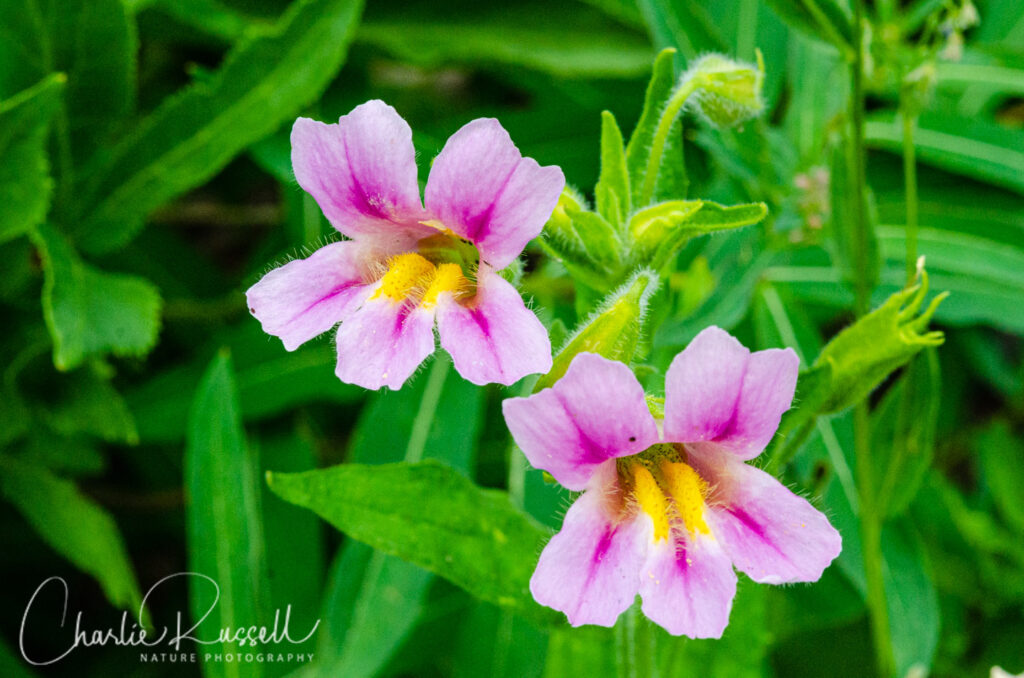 If you click on lightbox image below you will be able to scroll through all of the plants (and some other things) that we found on this hike (2020). I’ll include those from 2017 a bit further down. All photos are available for purchase in a variety of formats.

Instead of starting off with the hike, as I usually do, let’s talk about how to find this spot.

, which is what led me to this wonderful meadow.

Barker Pass is not far from Tahoe City (Lake Tahoe). Starting at the roundabout there, drive 3.9 miles south on Highway 89, along the shore of the lake, until you come to Barker Pass Road. The problem is, the road sign isn’t very visible. Look for signs for the Kaspian Recreation Area (on the side opposite from the lake), which are much more noticeable. Turn onto the road there (this is Barker Pass Road).

After going about 2.3 miles from Hwy 89 there is a “Y” in the road, and both branches are marked as Barker Pass Road on maps. Take the left branch, which keeps you on the paved road. This will cross Blackwood Creek.

From the “Y” you will go 4.1 miles. After a sharp bend in the road you will cross Blackwood Creek. Note that this is at least the fourth crossing of the creek along the road. If you are comfortable with using an app like Google Maps with GPS coordinates, you are heading to 39.07289, -120.22288. This is one of the more lush creek crossings, looking towards your left. 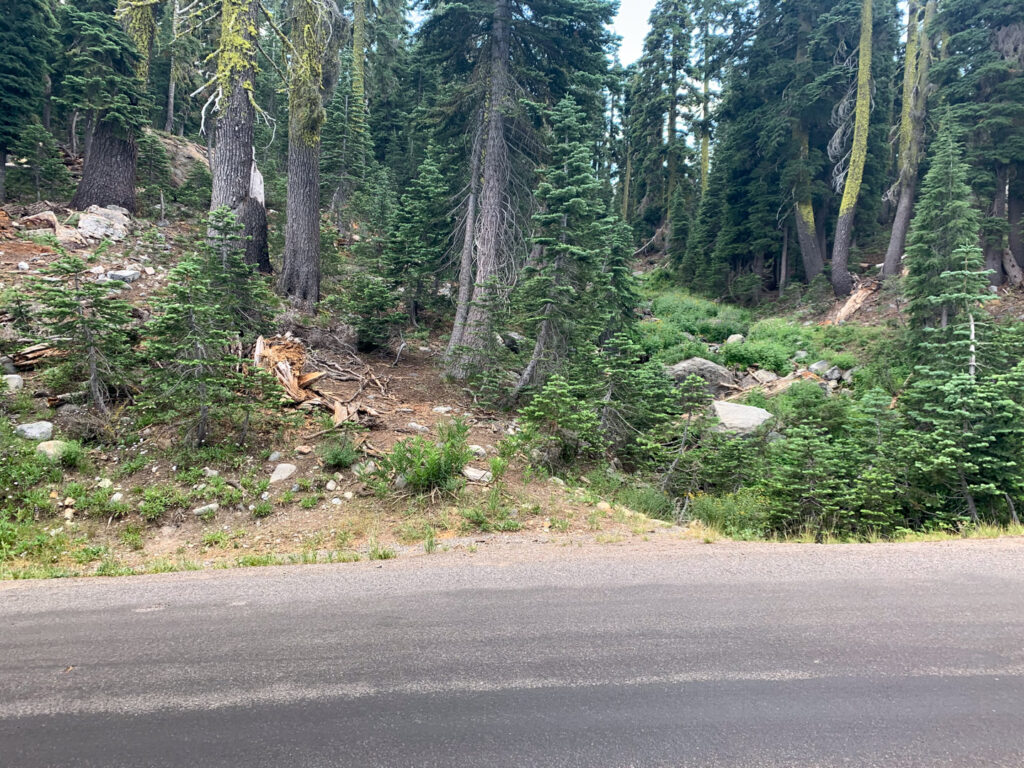 This is the trail head.

Can you see the trail? It’s not very noticeable, and there isn’t a marker.

You will have to drive past the creek a short ways to find a good parking spot. There is room for several cars to pull off the road, on the right.

The trail goes up the hill just to the left of the creek. It is not very well marked, but you can see it when you get close. However, before heading up the hill, you will find a wonderful garden of wildflowers right there before the creek goes under the road. 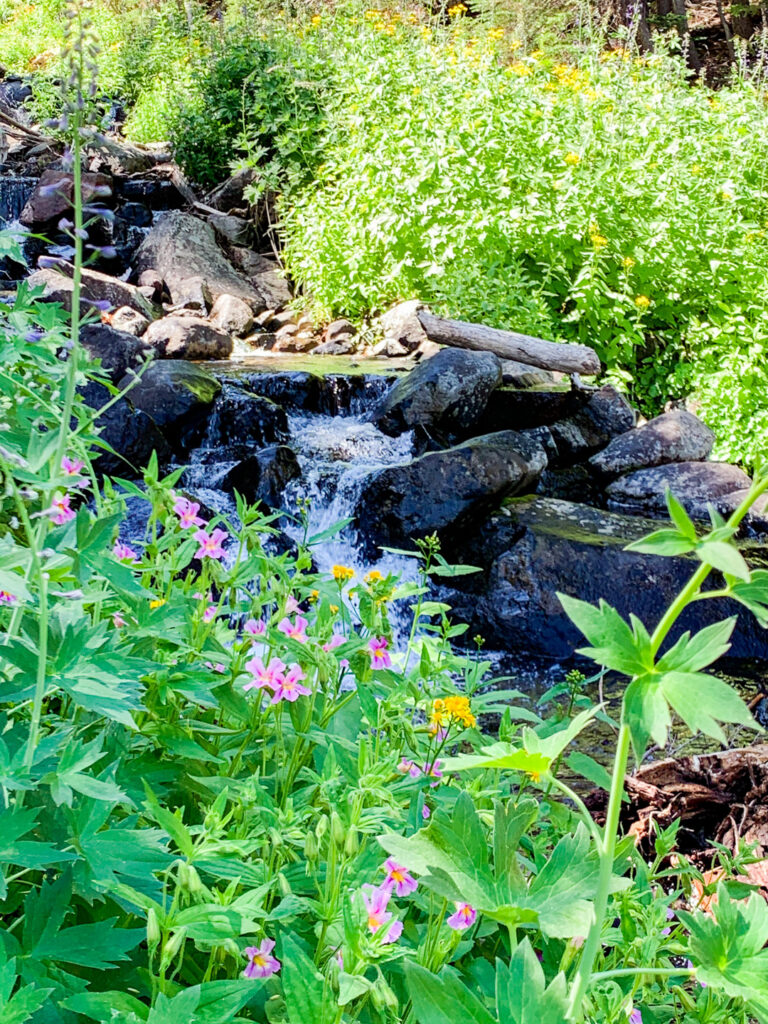 The creek at the start of the hike, just up from the road

The trail wanders about a bit, sometimes close to the creek, sometimes not. In fact, there are times when you won’t see a trail at all, particularly when you cross some of the open gravelly/dry spots. Just keep going uphill, with the creek on your right. Keep in mind that the source of the creek is the meadow.

Along the way there will be a variety of wildflowers that you won’t see in the meadow. Dusky onion, prettyface, paintbrush, and many more. 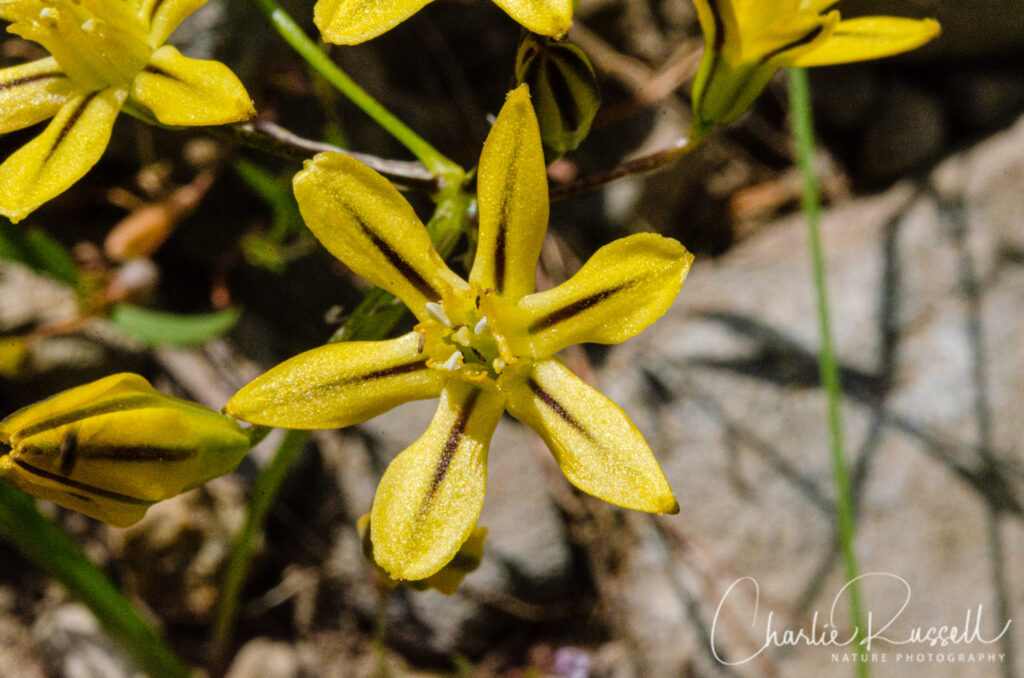 Here’s the meadow. At first it looks a bit disappointing, because it is covered with willows and other smaller shrubs. However, the stream wanders through here, and there are quite a few wildflowers tucked in open spots scattered about. 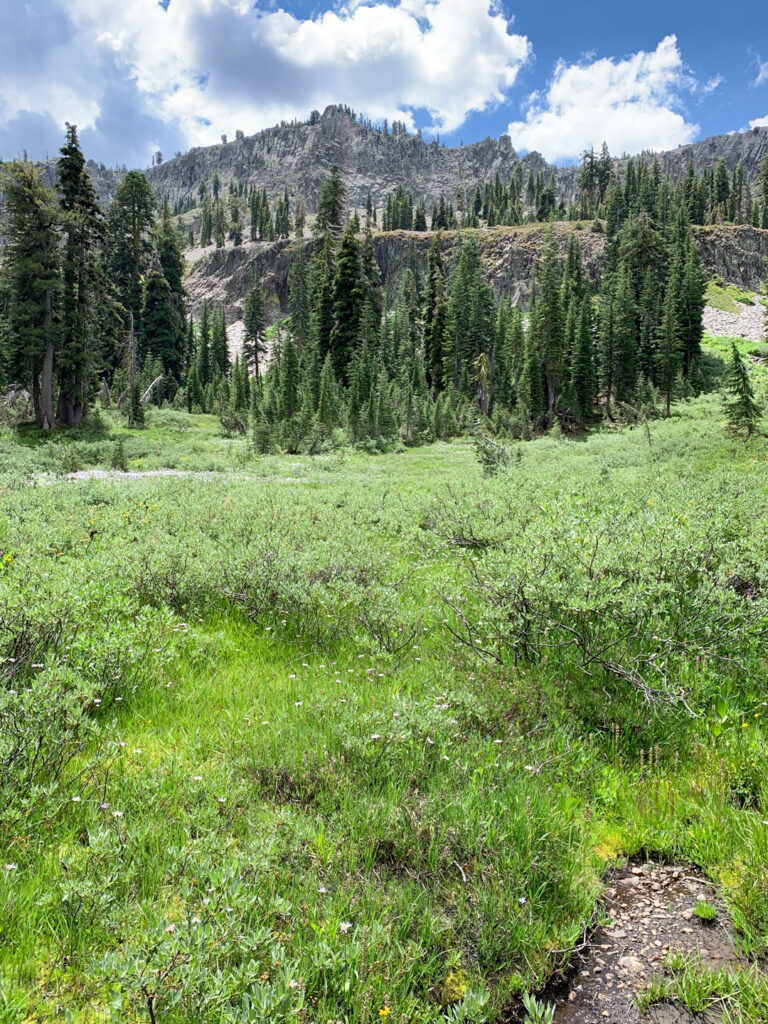 We followed the stream through the center, then headed uphill to the right (for lilies), looped around to the rockfall that you can see at the top of the meadow, and worked our way back down the left. A different selection of wildflowers at each spot. 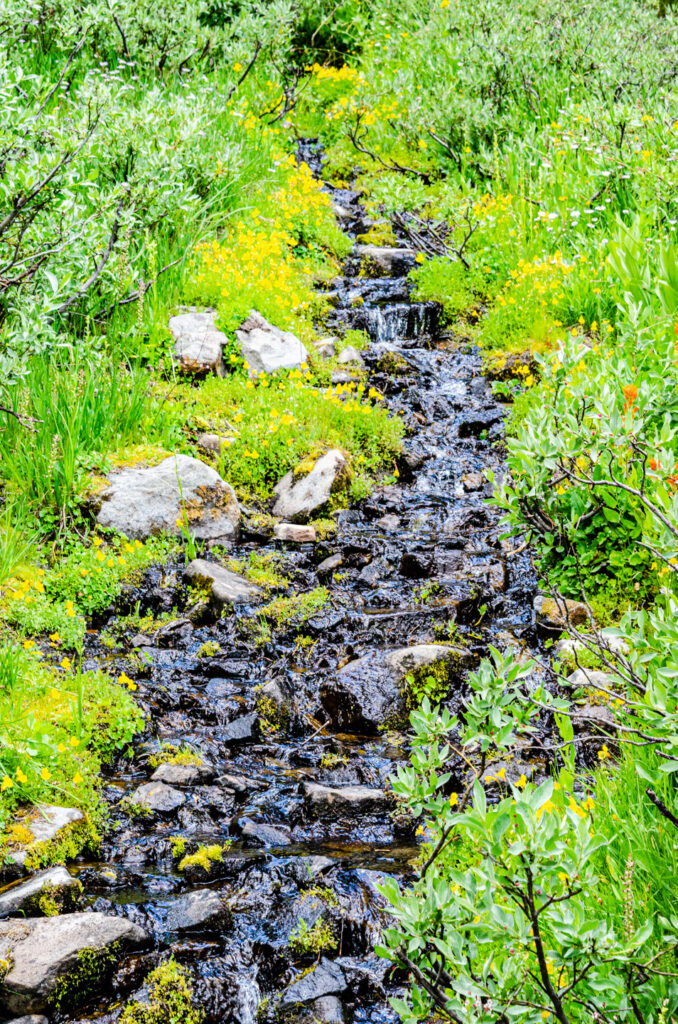 The rockfall is not very stable, so you want to be careful. There were some wonderful garden spots at the bottom of the rockfall, where the water was flowing out from under the rocks. You can see some wildflowers higher up as well, but we didn’t go up that far. 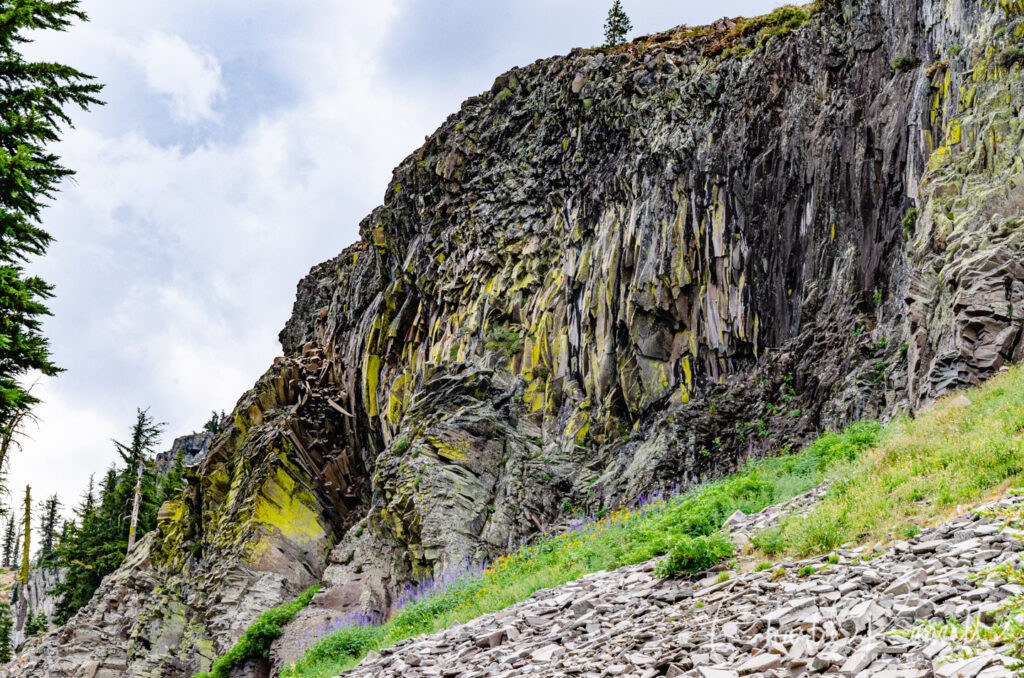 Rock wall at the top of the meadow. Lichen on the rocks, lupine and other wildflowers on top of the rockfall

Here’s the track that we followed. Our wandering made it 2.36 miles round trip, but as you can see, I zig-zagged all over, plus I went up on the rockfall a ways. I was searching for Gentian, which are supposed to be there sometimes, but we didn’t find them.

We’ve only visited this spot mid summer. In 2017 (a relatively wet year) it was the first week of August and we were at the tail end of the early flowers, with mid season flowers in peak form. In 2020 (a very dry year) it was the last week of July and the early flowers were mostly finished, flowers in the dry open spots (on the hike in) were mostly gone, some of the mid season flowers (elephant’s head) in the meadow were near their end. But other flowers were at their peak (orchids, lilies), and we didn’t find many of the late season flowers. I still hope to find Gentian there!

I’m guessing that this will be good from early July through mid August, depending on how much precipitation there is earlier in the year, and the temperature. Maybe even start here in late June? I’m going to try again, at a different time. The spot is out of the way, we’ve never come across another person there. Also, looking at aerial photos, I believe that there are additional meadows to explore in both directions from at the top of the main meadow.

Note that in August you start to get mountain thunderstorms, so keep an eye on the weather. This year we did have some threatening clouds and lots of thunder, but it didn’t rain on us until later afternoon when we were already back in our car and heading down the road.

There were flies and mosquitoes, but the flies were just annoying and the mosquitoes weren’t too bad. I recommend that you take some bug spray.

Here’s a listing of the native plants that we found on this visit. I don’t have pictures of all of these in the gallery, as some that I took are low resolution pictures using my phone camera (I use those for iNaturalist observations).

And we also found the following:

In addition, we visited this spot in early August of 2017, a year with higher rainfall than this year. There was a different set of wildflowers then, some that we didn’t find this year due to less rainfall earlier in the year. Here’s a gallery of some of the additional wildflowers that we saw then (I didn’t include duplicate photos of those we found in 2020):