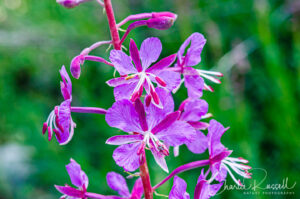 The Truckee Donner Land Trust manages several properties in the Lake Tahoe area, and in late July 2020 we decided to try one we haven’t visited yet, Cold Stream Meadow. This is on the way to Mt Lola, which is a popular trail (but much longer than I can handle). We found a wide variety of native summer wildflowers along the way, even this late in the season.

Unfortunately, for a variety of reasons, we didn’t actually make it to the actual Cold Stream Meadow. One reason was some bad information (it was farther away than I expected), another reason was that there were so many wildflowers to photograph along the way, we just ran out of time!

Lettuce wirelettuce – seems like a redundant name? It isn’t an uncommon flower, but I’ve not come across it before. The blossoms are about the size of my thumbnail, and we found them in several spots along the trail.

I get really excited when I find Columbian monkshood, it is such an interesting and beautiful flower. Tough to get a good photo of it, though, because of the shape. We found quite a few of these in places where the trial took us along the stream. 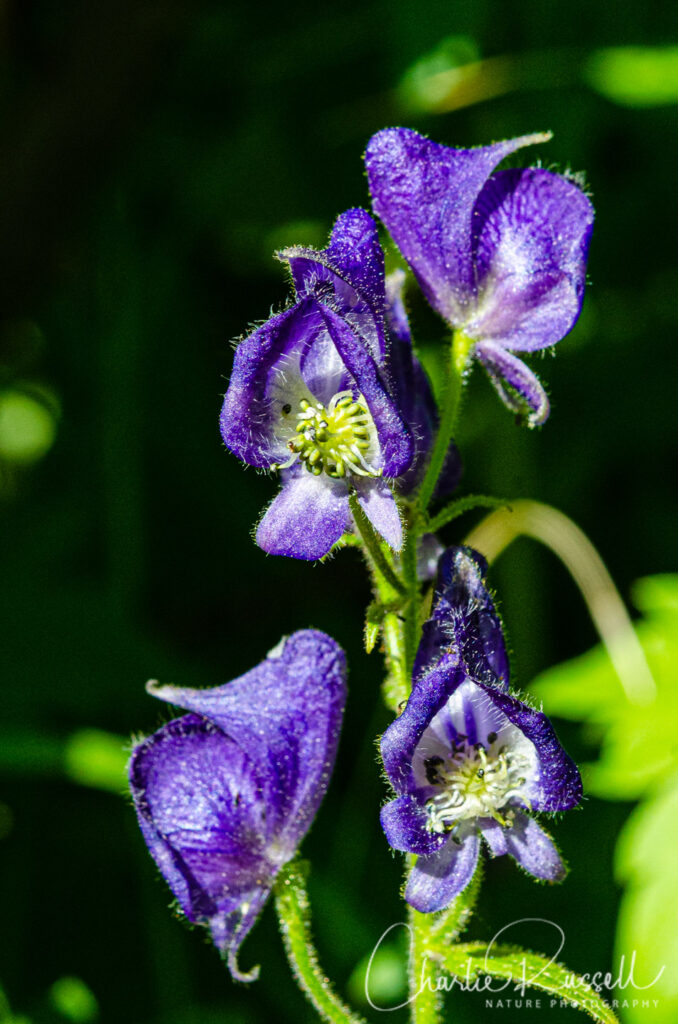 We found several species of Delphinium along the hike, including this Sierra larkspur. Delphiniums can be hard to identify to species. 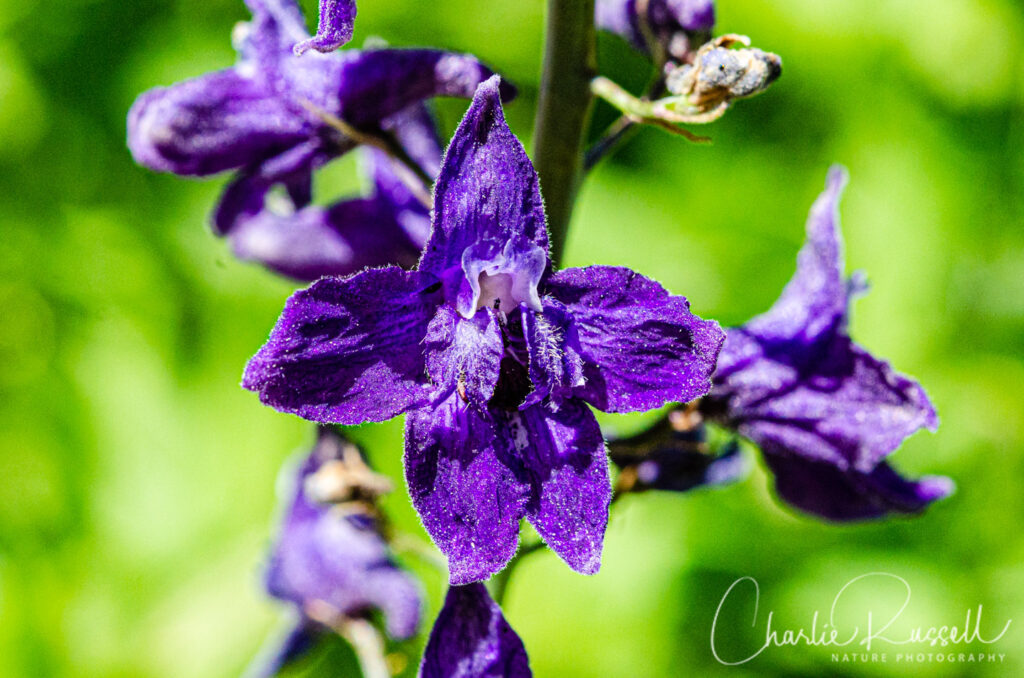 Four different species of Monkeyflower! Three yellow ones, and a patch of this wonderful California blushing monkeyflower. This was a good year for this species, we came across this in quite a few of our hikes. 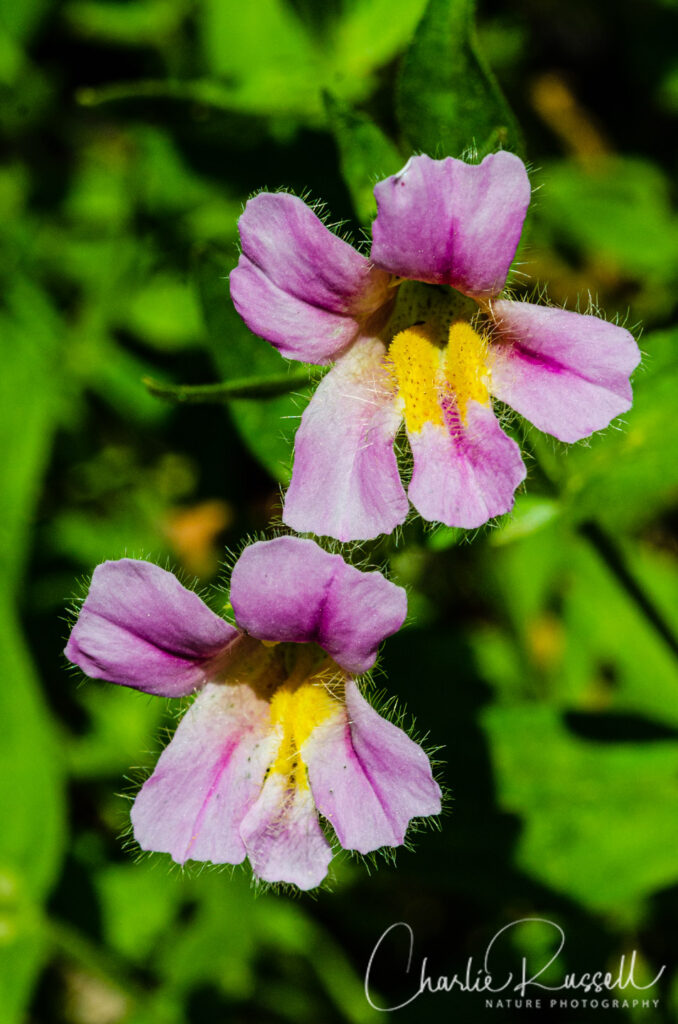 My favorite California native wildflower genus is Calochortus. We were lucky to find some on this hike – a friend who hiked here about the same time missed them. 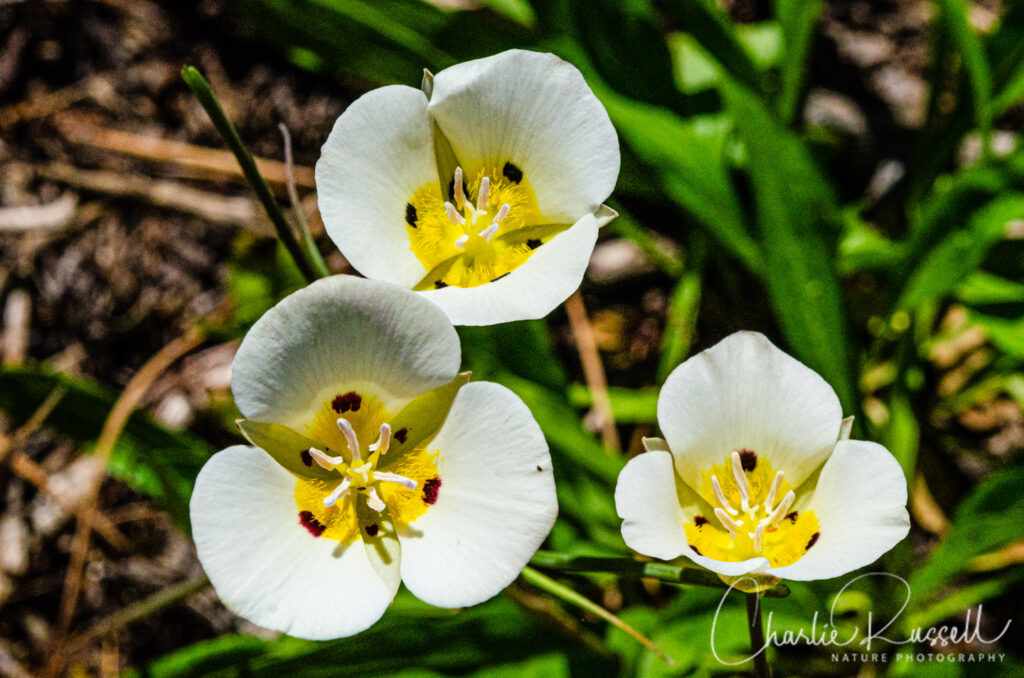 The hike we took was about 6 miles round trip, out and back. The grade was a bit steep in places, without a lot of breaks, but it isn’t too difficult. You climb about 1000′ in three miles, and if you continue on you will gain a lot more. Since it was late July, the lower sections were a bit hot, and there isn’t a lot of shade. There weren’t a lot of wildflowers early on, but when you get a bit higher it was quite rewarding. 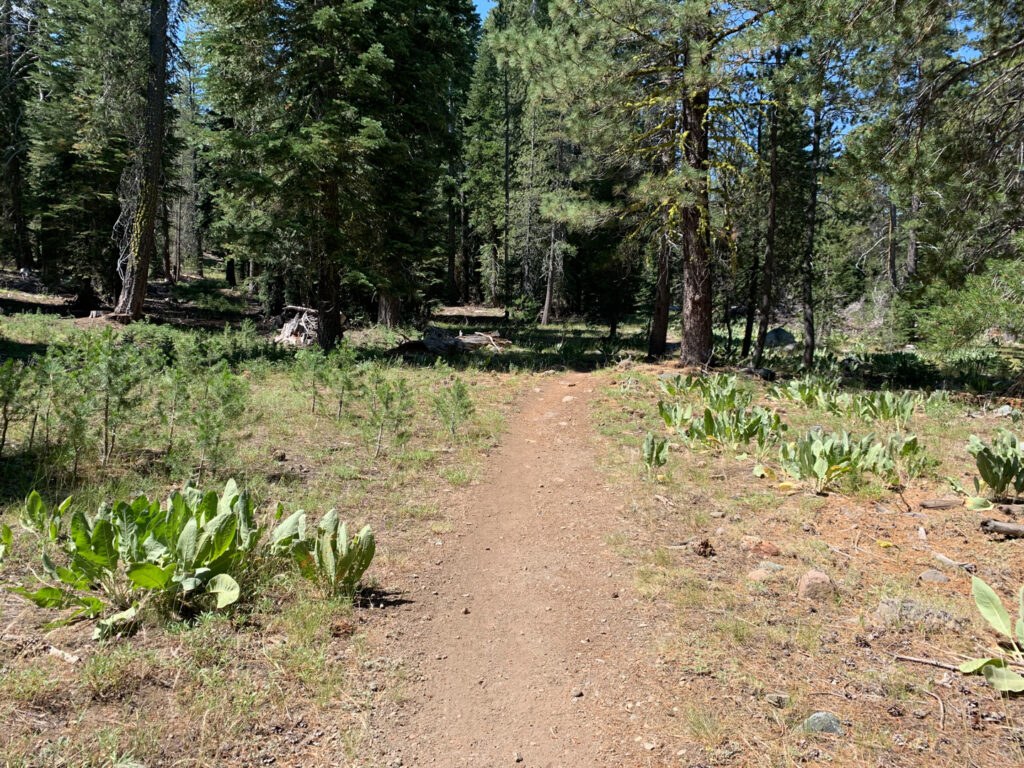 Start of the trail: It was a bit hot and exposed

About a mile in the trail comes close to Cold Stream. At first you are up the hillside from the stream, but eventually you get closer. 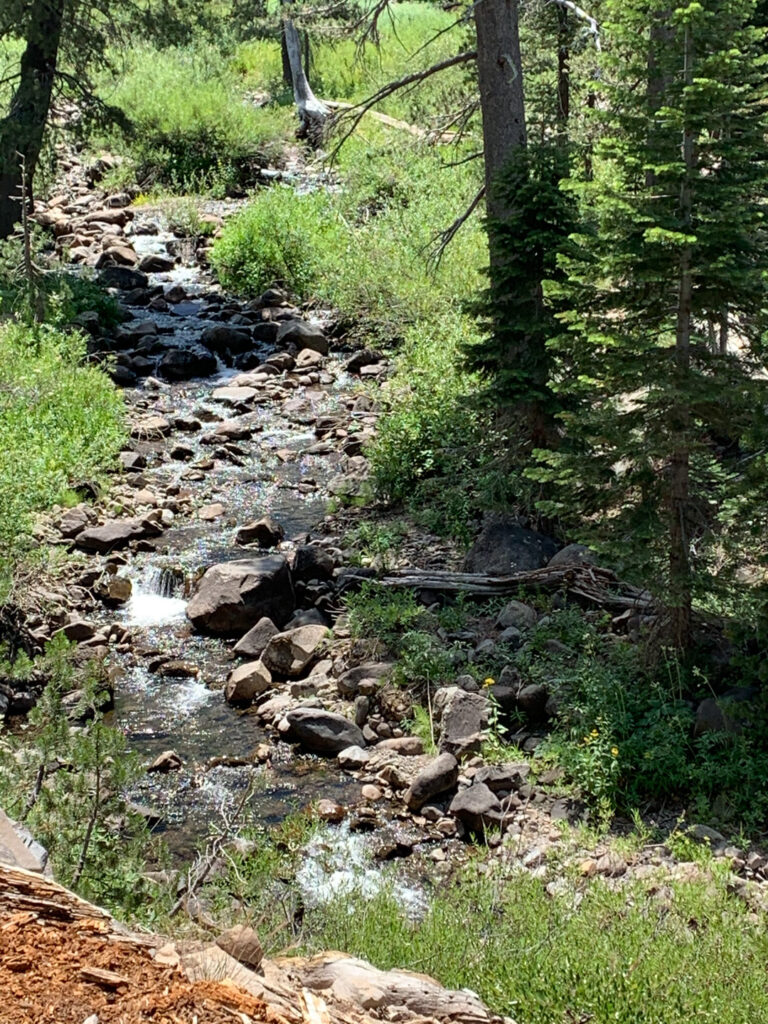 The trail parallels the stream, although sometimes you aren’t this close

There are some forest service roads in the area, and roughly 2 miles in the trail meets one. I highly recommend staying on the trail as it veers off to the right, because this section is where we found a small meadow that was loaded with wildflowers. I actually thought that this was Cold Stream Meadow, it was so nice! But it wasn’t… 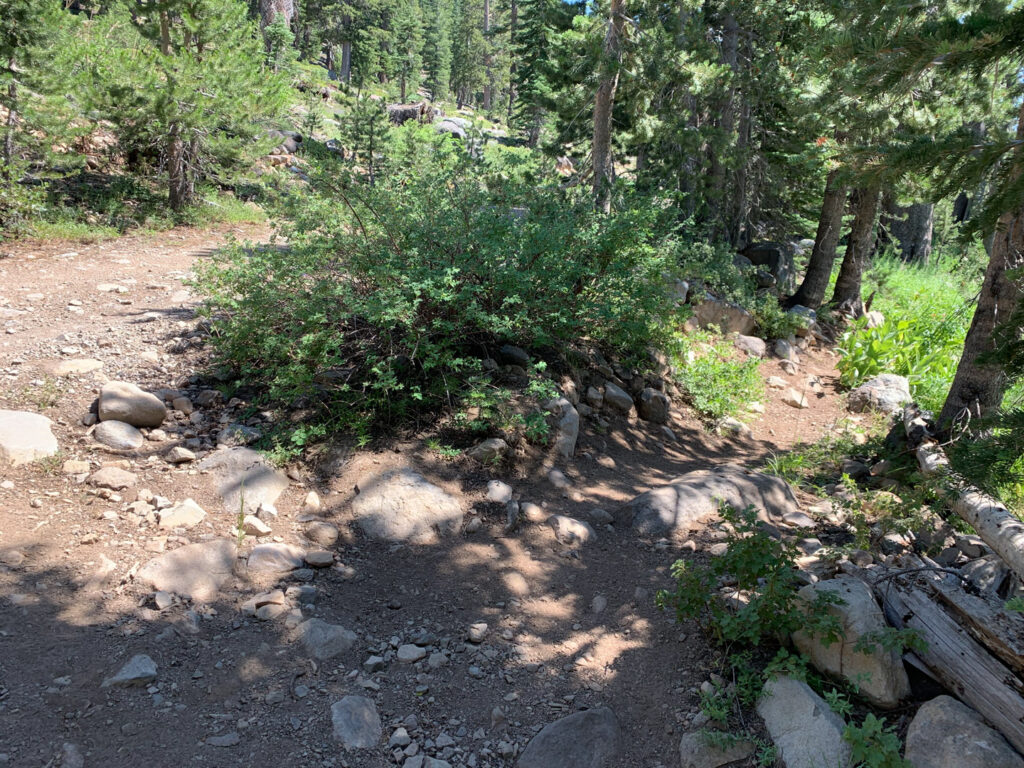 The trail joins a rough forest service road. It is best to take the right hand branch, the trail towards a meadow.

At the three mile mark the trail crosses Cold Stream. In late July it is easy to cross, I wonder how easy it is earlier in the year? We spent some time looking along the stream here, and there were wildflowers that we hadn’t come across at lower elevations. Sierra bog orchid, Brook saxifrage, the four species of Monkeyflowers, and more. 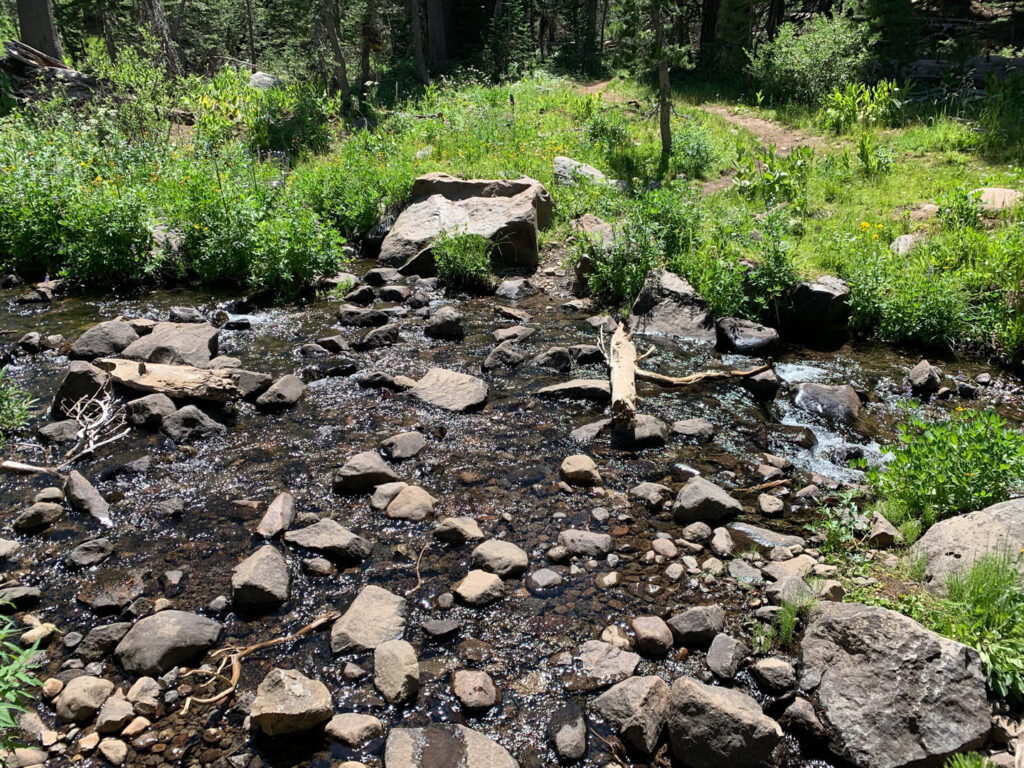 This is about as far as we went, with a stream crossing

By this point we were running out of time (and energy, we weren’t acclimated to the altitude) so we turned back. I did spend some time looking around on the other side of the stream, and the trail is a bit confusing there. It looked like it was heading up the mountain steeply, and I didn’t want to continue on to Mt Lola (the summit is another 3 miles further on). Later I realized that after a short uphill section, the trail should split, with one part heading steep up hill and another part heading back to the stream. I figure that Cold Stream Meadow was less than a mile further up stream. We’ll try reaching it again another year, I hope!

I often use Google Maps to get me to a trailhead, but this is one of those cases where you do NOT want to use that app. Google directions will get you there, but they will direct you down a very rough dirt road. There is a better way! I used the the directions on the Truckee Donner Land Trust website.

From Interstate 80 in Truckee, drive north on Highway 89 approximately 17 miles to Jackson Meadows Road and turn left. Drive about 1.5 miles to a left turn marked “Independence Lake Road”. Turn left onto this graded dirt road, cross the bridge over the Little Truckee River, and proceed to the first right turn (0.8 mi from Jackson Meadows Rd). This unsigned road is Henness Pass Rd. In just over 3 miles, the Mt. Lola trailhead parking area is on the left.

We hiked in late July 2020 and there were very few people on the trail. It was late for many wildflowers, but the later season ones were doing quite well. The lower section was dry and dusty, most wildflowers had gone to seed. However, higher up, it was nicely shaded and there were quite a few interesting wildflowers.

This should be a good hike any time from late May through August. You may find that the stream is hard to cross early in the season.

Bring insect repellent, there were some annoying flies that were biting. A few mosquitoes, but not bad during midday when we were hiking.

One of the great things about this hike is that there were very few non-native plants on this hike!

Here’s a listing of the native plants that we found on this visit. I don’t have pictures of all of these in the gallery, as many that I took are low resolution pictures using my phone camera (I use those for iNaturalist observations). “nif” means “not in flower”.

Not far from the trailhead you can find Perazzo Meadows, which is at a lower elevation so the flowers bloom earlier, and will differ from what you find on the Cold Stream Meadows hike. Here are a few of the flowers we found in a quick visit after our hike:

In addition, we found the following: